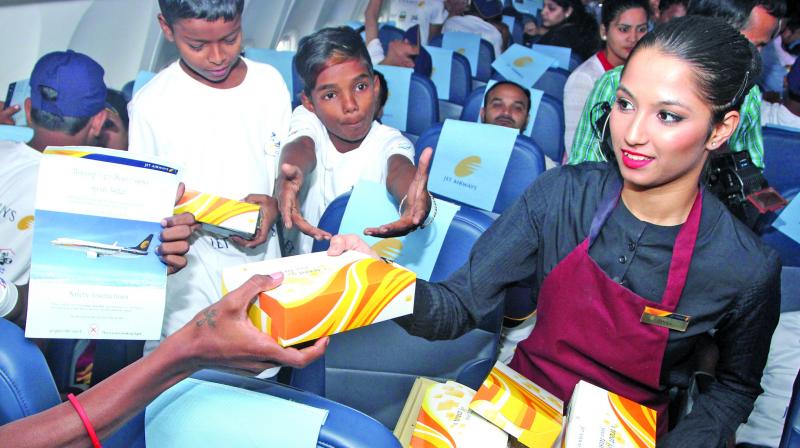 Children from Save the Children India, Nanhi Kali and Shelter Don Bosco NGOs were present for the joyride. (Photo: Mrugesh Bandiwadekar)

Mumbai: With Children’s Day just a day away, a private airline organised a special joyride for almost 110 kids from three different NGOs. Children from Save the Children India, Nanhi Kali and Shelter Don Bosco NGOs were present for their “flight of fantasy.”

These children reached the domestic terminal of international airport terminal two T2 around 12.30 pm. Later they checked-in for flight 9W 9828, which took off from Mumbai airport around 3.45 pm. After an hour of flying over the Mumbai city the flight returned to Mumbai airport again. It was organised by Jet Airways.

Kalyani Agavane, a special child and a student of class five, praised the beauty of the picturesque western coast in sign language.

Another special child with hearing disability Naseer Idari (13) told this paper, “I was trying to find my house from the aircraft, but I couldn’t find it. Everything appears small from here and my house is already small.”

Saba Sarin (16) a specially-abled girl with learning disability, who is doing a beautician’s course said, “I enjoyed it. I want to travel more, and don’t want to go back.”

Father Roshan Gonsalves of Don Bosco said, “These children are seeing an aircraft from such close quarters for the first time, and so they are excited.”

Vinaya Shirdhankar coordinator of Nanhi Kali, said the kids belongs to lower middle class and poor families. “Their parents work as domestic help and private drivers mostly. When in October the airline approached us for the ride and we informed the kids, they were very excited.”

Naseem Warunkar of Save the Children said, “In 2014 too the airline had organised a similar ride. Since then our children have been keen to go on the joy ride.” Thirteen-year-old Annapurna Ingle a special child, after seeing the aircraft taxiing on the runway thought the plane only moves on the ground, but once it took off, the girl screamed in fear.

Riddhi Halwai, a 10-year-old girl who was sitting next to Annapurna, immediately told her to calm down and asked her to enjoy the view of Juhu beach. Nidhi Yadav and Mehak Barde, students of class five, were thrilled to get an aerial view of Mumbai from the sky. “I want to be a pilot and fly everyday.”

Eight-year-old Arshad Shaikh and Jishan Qazi on the other hand wondered why they were unable to see stars despite being in air and so close to the sky.

Samir Shah and Varsha Jagdhane were loved the ride so much that they refused to alight after landing.

Meena Beda, another 10-year-old, asked this newspaper, if her mother could also travel in an aircraft. “She works hard as a domestic help after my father left her and me, so I want to her to ride in the flight, because it looks amazing,” she said.