The victory was important for Congress, as in last three years, the Congress was seen losing its ground. 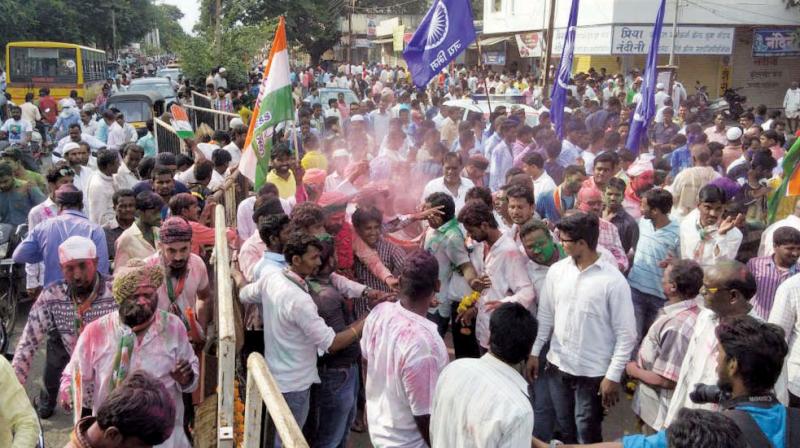 Congress party workers celebrate the party’s win in Nanded. The part had won 41 seats in the last election in 2012. This year, they have won 69 so far.

Mumbai: Despite BJP’s strong campaign and a challenge from All India Majlis-e-Ittehadul Muslimeen (AIMIM), Congress on Thursday managed to come up on the top in the polls held for the Nanded-Waghala Municipal Corporation. The party could not only attract AIMIM’s Muslim voters but also gained Shiv Sena’s voters. The Sena has reduced to only one seat from earlier 14 and AIMIM to zero from 11 seats in 2012. BJP has gained four seats but Congress gained 28 seats more than 2012 polls. Nanded and neighbouring Hingoli were the two only Lok Sabha constituencies where Congress had won seats during 2014 Modi wave.

Reacting on the Congress sweep, state president Ashok Chavan said that the BJP’s ‘return journey’ has started. “The people have shown confidence in the Congress and have not swayed away by the BJP's false promises. The BJP's wave is now receded and soon the Congress will come to power in the Lok Sabha and the Assembly as well,” said Mr Chavan.

BJP’s entire machinery made it a prestige issue to win the Nanded municipal body. Its 10 ministers, MLAs and even chief minister Devendra Fadnavis aggressively campaigned for the polls. In fact, seven corporators of Congress had joined the BJP before the polls.

Ashok Chavan’s brother-in-law Bhaskar Khatgaokar had left the party to join BJP during 2014. Khatgaonkar was the former MP from Nanded, the seat he vacated for Mr Chavan.

The victory was important for Congress, as in last three years, the Congress was seen losing its ground. But taking all by surprise, Congress got more than majority seats in Nanded.