Significant damage was caused to the TMT bus. 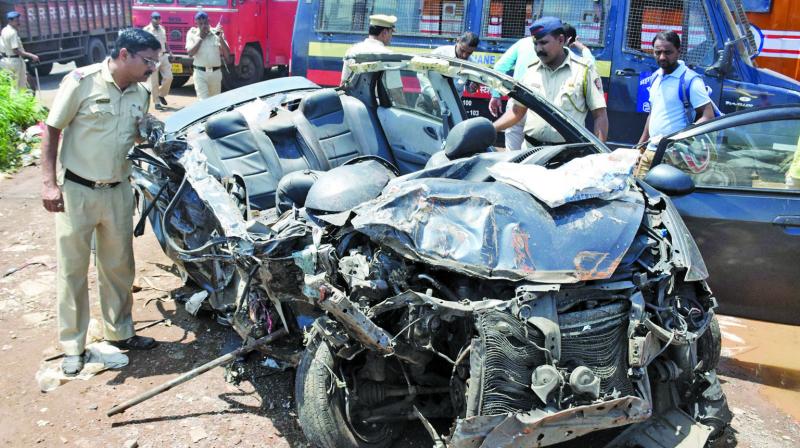 No passenger in the bus was hurt due to the collision.

Mumbai: Four persons died in an accident that took place around 10 am at Mankoli, Bhiwandi near a warehouse, after a Swift Dzire car dashed into a Thane Municipal Transport (TMT) bus. The injured were rushed to hospital but declared dead on arrival. An FIR has been registered against one of the deceased, who was driving the car.

A senior Narpoli police official said, “The mishap happened at around 10 am near Mankoli on the Bhiwandi by-pass road. The case was going towards Thane from Bhiwandi when its driver lost control of the vehicle and hit the divider after it collided with a TMT bus.”

Vikrant Singh, the driver who allegedly rammed the car into the bus had been to a party, the previous night in Dombivali. The police officials said, “They were partying all night and the driver was drunk while driving the car. In the morning, despite not sleeping all night and being drunk, Vikrant drove the car and dozed off while driving. He lost control of the car, as he didn’t notice a speed breaker. The car then broke the divider and bumped into the TMT bus.”

Although significant damage was caused to the bus, no passenger was hurt. An FIR has been registered in the Narpoli police station against Vikrant under sections 304 (A), 337 of the IPC and other relevant sections of the motor vehicle act.