At the same time, the MNS leader lauded Marathi actors, including backstage artists, for participating in flood relief works. 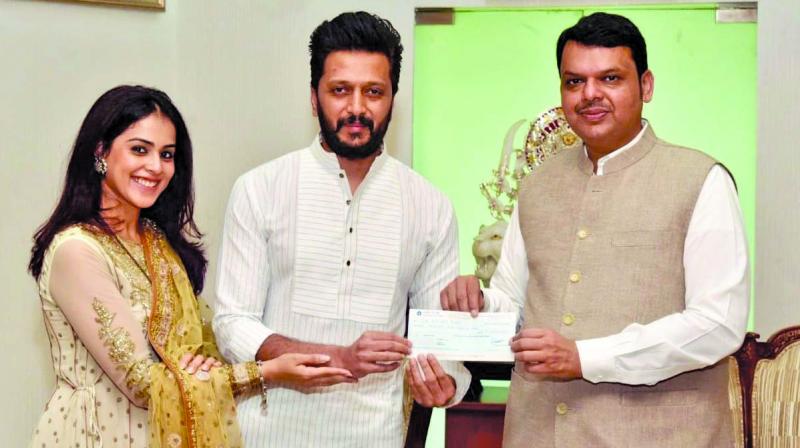 Riteish Deshmukh and Genelia with the CM.

Mumbai: While Marathi actors have stepped forward to help the flood-affected people in Maharashtra, the MNS has blasted Bollywood for allegedly turning its back on victims of the deluge.

“Lanat hai unpar, jinke paas danat nahi hai…” (Shame on those who do not have the charity to help), said Ameya Khopkar, president of the MNS Chitrapat Sena.

“They say there should not be any politics in a moment of crisis. But where are the Bollywood stars who say that Maharashtra is their Karma bhoomi (workplace) in this difficult period?” tweeted Mr Khopkar.

Questioning  Bollywood actors loyalty towards their Karma bhoomi, Mr Khopkar alleged that they have failed to come forward to Maharashtra’s help despite making a fortune in the state.

Taking a jibe at actors active on social media site Instagram, he argued that they  often post videos and bytes to promote each other’s mediocre films but failed to post even a single video to appeal for helping flood-hit people.

“It is up to an individual to decide what to do. But this time, the matter is serious. It is very annoying to see how these stars, who portray themselves as messiahs on the big screen, can forget their Karmabhoomi,” Mr Khopkar added.

At the same time, the MNS leader lauded Marathi actors, including backstage artists, for participating in flood relief works.

Marathi stars in the entertainment industry came together and made arrangements to supply relief materials systematically. Even the backstage artists have lent their hands in this exercise, he said.

“Thank you Riteish and Genelia Deshmukh for the contribution of `2,500,000 towards the #CMReliefFund for #MaharashtraFloods! (sic)” tweeted the CM.

It is to be noted that Mr Deshmukh is the son of former Maharashtra chief minister late Vilasrao Deshmukh.

Team India batsman Ajinkya Rahane, too, made an emotional appeal saying that he will do his bit to help the flood victims.

“Praying for everyone affected in the floods across the country. Let us all do everything we can to help them recover quickly,” he tweeted.