Tejas Express sweeps ahead of rivals

Only 2 riders ask rlys to clean up area near seat via Clean My Coach App. 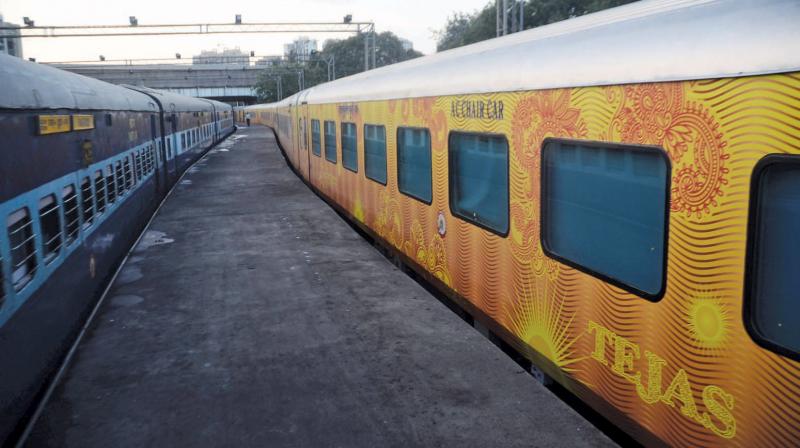 Tejas Express is among the 55 trains run on the Central Railway that have the same facility to maintain cleanliness.

Mumbai: The three-month old semi-luxury long-distance Tejas Express has outshined its counterparts in maintaining cleanliness, with only two train passengers having lodged their complaints since its inaugural run on May 22. Tejas, India’s first fully air-conditioned train aimed at providing economic luxury travel, has seen only two passengers ask the railways to clean up around their seats via the Clean My Coach (CMC) facility, said officials. The train is among the 55 trains that have the same facility run on the Central Railway (CR). The CMC facility to clean up is available to passengers via text messages.

The phenomenal performance is due to the close monitoring by the Railway Board. An official said, “Tejas has become the symbol of what the railways have been trying to accomplish in the past few years, that is to provide the passengers with the feel of luxury travel without burning a hole in their pocket.”

“The railways have been facing tough competition from airlines that have an inherent advantage of cutting travel-time by almost 80 per cent. We are fighting the battle to keep the railways relevant at a time when it has become almost a relic in most countries.”, the offical further added.

Other than the facility of cleaning one’s coach in the Tejas Express, the CR operates and runs 33 long distance trains with the same facility per day. An average of 30 service requests or complaints from passengers are received from these trains, an official said, “Some trains like the Mahanagri and the Vidharb Express and Punjab Mail see the highest number of complaints, so it averages out to  one complaint per day.”In fact, the Tejas story was one of the few in which, the mirror was turned towards the common man who was found damaging LCD screens and indiscriminately littering on the train's return journey after the inaugural run.

CR, chief public relations officer Sunil Udasi said, “The fact that only two people have made the service requests to the clean my coach facility is a testament to the efforts we have been making to provide hygienic and clean trains to our passengers.” He further added, “The people of the city have taken to the train and we will continue to strive to provide the same standards to our patrons.”