Buffers have been set up at terminal stations like CST, Churchgate, Panvel where two flat tops are attached both, to the train and the platform. 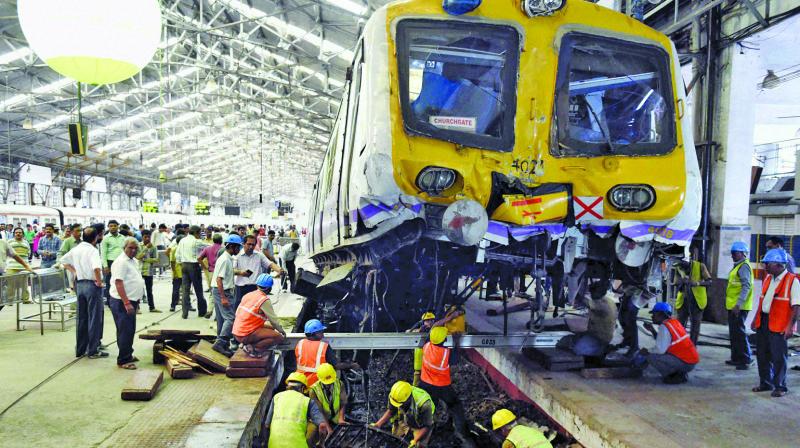 Buffers (safety breaks) are set up at terminal stations like CST, Churchgate, and Panvel.

Mumbai: After its two–year search for an oil-based hydraulic buffer to replace a water-based buffer at Churchgate, which got damaged in 2015, did not yield any returns, the Western Railways (WR) has finally invited tenders for an apparatus that stops trains pulling into railway platforms. The buffer at platform 3 was rendered useless back in 2015 when, due to the negligence of a motorman, a train had jumped the platform and entered the concourse of the station.

Buffers have been set up at terminal stations like CST, Churchgate, Panvel where two flat tops are attached both, to the train and the platform. They act like a safety feature in case the train comes in at a high speed.

The Western Railways has finally given a tender for this particular buffer on platform 3, while officials said that the delay in replacing it was caused as the buffer is a hydraulic one and are hard to find. An official said, “We were trying to find an oil-based buffer but realised that it would not be possible, hence we have currently opened the tender for the old hydraulic one.”

No one can forget the jarring CCTV footage that was released on the same evening of the incident, in which three coaches of the train were strewn over the platform and luckily no major harm was caused. Another official said, “We were very lucky that the incident had occurred at 11 am on a Sunday, as a result of which there was hardly anyone at the station and in the train as well.”

Right now the scene of the accident has two planks by which the motormen are reminded that they need to exercise caution at the spot and stop at a distance from the buffer. Buffers were fixed way back in 1930 by a company called Ransomes and Rapier in Ipswich from England.