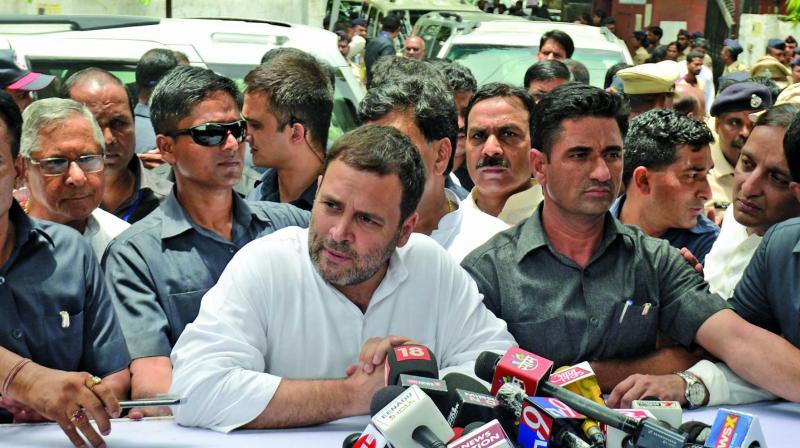 Mumbai: Congress president Rahul Gandhi, who was allowed to leave the Bhiwandi magistrate’s court after conclusion of defamation proceedings on Tuesday, greeted the crowd gathered outside and said that charges had been slapped against him and that he would face trial. Losing no opportunity to criticise the central government, he said, “Ten to 15 rich people are running this country... Narendra Modi does not speak about rising fuel prices”.

“Let them (the BJP and RSS) slap as many cases as they want against me. Ours is a fight of ideology. We will fight them and win,” Mr Gandhi told reporters outside the court.

Mr Gandhi reached the court premises at 11am after which his convoy remained outside as he walked towards the court. He was accompanied by state Congress president Ashok Chavan, Manikrao Thackeray, Leader of Opposition Radhakrishna Vikhe-Patil, former CM Prithviraj Chavan, and Congress state in-charge Mohan Prakash. Mr Gandhi entered the courtroom at11.05am and came out at 12.05 pm.

There was heavy police bandobast in the court premises. Police personnel including women constables were deployed at all critical spots of the premises. No outsiders or common people were allowed inside till Mr Gandhi left. Thousands of supporters raised slogans and waved Congress flags outside the court premises when Mr Gandhi arrived.

After the court proceedings concluded, complainant Rajesh Kunte said, “I have full faith in the court and I am sure justice will be delivered.” Mr Kunte also alleged that the police gave special treatment to Mr Gandhi while he and his counsel were kept away and frisked thoroughly before being allowed to enter the courtroom.

July 2016: SC heard the petition filed by Mr Gandhi and said he should not have collective denunciation of an organisation and would have to face trial if he did not express regret for his remark.

May 2018: Bhiwandi Magistrate summoned him to remain present on next hearing.