Site close to where child died yet to be barricaded 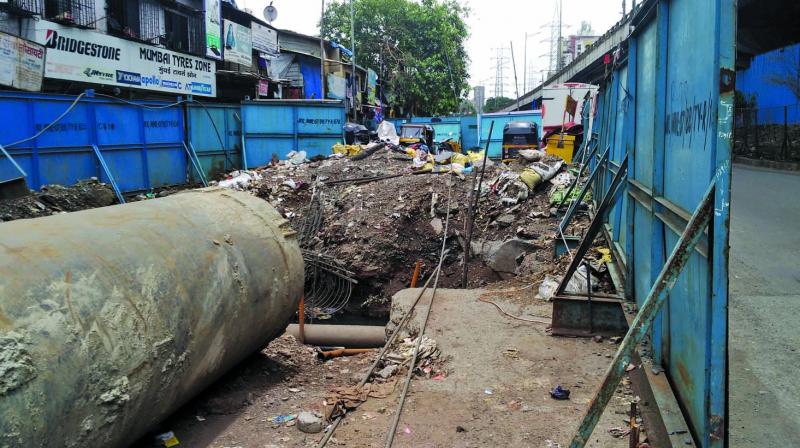 The deceased, a 4-year-old girl, Sheetal Mishra had gone out to buy chocolate when she slipped inside the pit filled with rainwater and died of drowning.

Mumbai: A day after a four-year-old girl died after falling into a pit at a Metro 7 corridor (Andheri east to Dahisar east) construction site near Oberoi Mall in Goregaon east, The Asian Age found that the construction site, which lies close to the accident spot, has yet to be barricaded by the contractor, which could lead to other similar tragedies. However, the accident site has been barricaded.

Locals claim that the contractor did not barricade the site properly and children often fall into the pit. “In the past, we have rescued children from the pit, but this time we couldn’t rescue this girl because we didn’t know that she had fallen,” said a local.

When this paper visited the site, we discovered that another construction pit, just a stone’s throw away from the accident site, was also open.

As per the Mumbai Metropolitan Region Development Authority (MMRDA)’s monsoon preparation, the pits dug up for the piling work were supposed to be covered by safety nets, however none were seen during this paper’s visit to the site. Instead, the pits were filled with rainwater, thus making them vulnerable to similar tragedies. Officials have called for de-watering pumps at each site to prevent water-logging.

The deceased, Sheetal Mishra had gone out to buy chocolate when she slipped inside the pit filled with rainwater and died of drowning.

The Varnai police station had registered an Accidental Death Report (ADR) after Mishra was declared dead when taken to the nearby trauma centre.

A senior MMRDA official said, “We will take action against the contractor only after the police report is sought. A fine will be imposed if proven guilty. Also the family of the deceased will be compensated.”

Additionally, the MMRDA in its statement has appealed to the citizens to avoid accessing all and any Metro barricades, be safe and sure of their path forward and avoid any mishap for their own safety.