The Mumbai BJP chief ruled out the perception that the Opposition parties are gaining ground in the city. 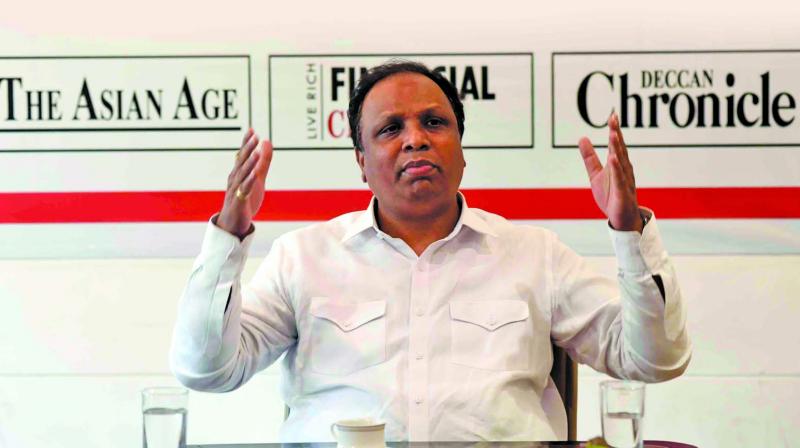 MLA Ashish Shelar held a discussion at the Mumbai office of The Asian Age on Friday. (Photo: RJ)

“The Opposition parties are “very weak” and are in no position to pose any challenge to us,” he said.

In a special talk with The Asian Age on Friday, the BJP leader said that the kind of response the BJP-Sena alliance candidates are getting in the city shows that they will win all seats easily.

“We had already won all six seats in the last Lok Sabha polls. We will continue with that performance this time too,” he said.  “If you analyse all six seats in the city, you will find that the Opposition has failed to find original candidates. Sanjay Nirupam was earlier with the Shiv Sena, whereas Sanjay Dina Patil was knocking on the doors of the BJP a few years ago. Urmila Matondkar herself is new to politics. On this backdrop, it will be interesting to see how much of a challenge they pose to the BJP-Sena candidates,” he said.

In the remaining three constituencies, the Opposition candidates cannot be considered as fighters. Milind Deora and Priya Dutt had earlier not shown interest in contesting, while Eknath Gaikwad is not fit to contest, said Mr Shelar.

The Mumbai BJP chief ruled out the perception that the Opposition parties are gaining ground in the city.

“They do not have ground as they found it hard to even nominate candidates. The then Congress city chief was seen running from one constituency to another for fear of losing. What does it show? Even for their own campaign, they have to call leaders from other parties for campaigning,” said Mr Shelar, who is also a MLA from Bandra-west.

The BJP leader predicted that the Maharashtra Navnirman Sena (MNS) factor will affect the chances of the BJP-Sena alliance in the Lok Sabha polls.

“We will not reply to Raj Thackeray’s speeches. The chief minister has already given a fitting reply. Let him speak against us. It will only enhance BJP’s chances in the polls. The voters of MNS will not vote for the Congress, Nationalist Congress Party (NCP) candidates, whereas non-Maharashtrians will have no choice but to dump the Congress,” he said.

Mr Shelar denied that there are differences between the workers of BJP and Shiv Sena for the Lok Sabha polls. “There is no dispute between us. We are all working together to ensure the victory of BJP-Sena alliance candidates,”he said.

While the Shiv Sena chief Uddhav Thackeray has announced that his party and the BJP have decided to share power in the state, Mr Shelar said the BJP is not planning to do so in the Brihanmumbai Municipal Corporation (BMC) despite having significant strength. “We have not thought about it so far,” he added.