Sujay claims he made move against his dad’s wishes. 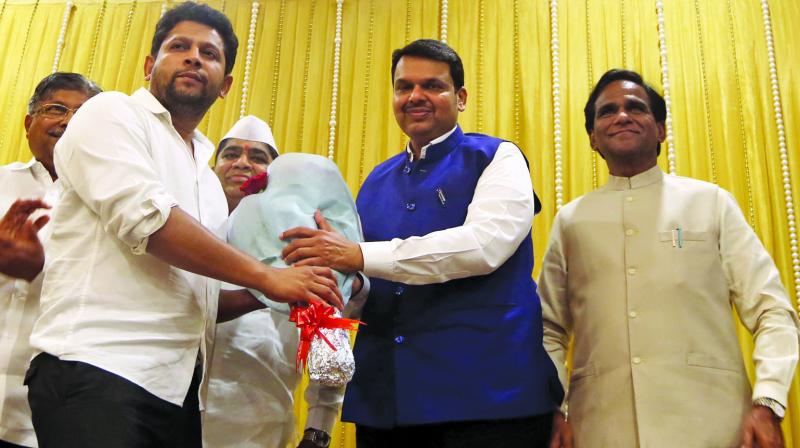 Sujay Vikhe-Patil joins the BJP in the presence of the chief minister on Tuesday. (Photo: RAJESH JADHAV)

Mumbai: In the wake of his son joining the Bharatiya Janata Party (BJP), Congress leader Radhakrishna Vikhe-Patil on Tuesday said that he would remain in the grand old party and stated that he is ready to carry out any responsibility given to him by its high command. The Congress leader also ruled out his resignation from the post of Leader of Opposition in the Maharashtra Legislative Assembly.

Congress leader Sujay Vikhe-Patil — in a move considered to be a big blow to his party just ahead of the election — joined the BJP in the presence of chief minister Devendra Fadnavis and the BJP state president Raosaheb Danve in south Mumbai on Tuesday. Sujay Vikhe-Patil claimed he took the decision against the wishes of his father. “I don't know to what extent my parents will like this decision of mine, but I will work under the direction of the BJP and will try to make my parents proud,” he said.

He also added the chief minister and BJP legislators had a cooperative approach and they helped him take the decision.

Sources in the Congress said that Radhakrishna Vikhe-Patil had apprised party president Rahul Gandhi of his son’s intention to contest the election from Ahmednagar Lok Sabha (LS) constituency, but the Nationalist Congress Party (NCP) was not ready to give this seat up, so Mr Gandhi had asked him to direct his son to join the NCP.

However, NCP chief Sharad Pawar in a press meet in Pune on Monday raised questions over Sujay Vikhe-Patil's contribution to the constituency and also said that his party had defeated the Vikhe-Patils, an apparent reference to the defeat of Sujay Vikhe-Patil's grandfather, the late Balasaheb Vikhe Patil, who was a rival to Mr Pawar.