The team also witnessed destruction of mangrove stretches due to blockage of tidal water. 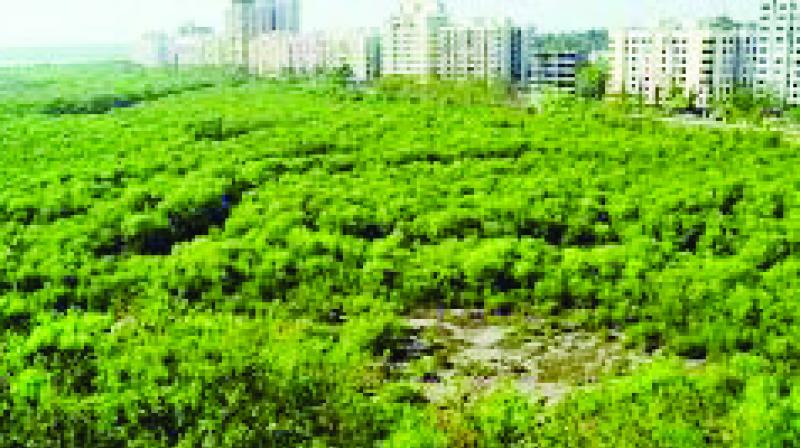 Funde Gaon, Nawghar Gaon, Kunde Gaon and Bhedkhar Gaon were submerged due to flooding from the creek.

Mumbai: With the Uran district having seen floods due to reclamation activities in the wetlands recently, the villagers have decided to boycott the Lok Sabha polls this year.

Locals from Kunde village, one of the flood-affected villages, stated that not a single official had come to the village to see the flood situation there. The Asian Age last month reported that four villages had been flooding after wetlands in the area were covered with debris.

Locals alleged that the reclamation and landfill taking place in the wetlands within NMSEZ plots had led to the blocking of free flow of water which in turn had led to the tidal water entering the villagers’ homes. “We had water in our home for three days,” said Vaishali Baliram Madhvi, a resident of Kunde Village.

“We have now decided to boycott the election and not a single villager will go to the poll booths,” said Dinkar Patil. According to the locals, Kunde village has around 1,000 voters.

Earlier in February, Funde Gaon, Nawghar Gaon, Kunde Gaon and Bhedkhar Gaon were submerged due to flooding from the creek. Following repeated complaints by citizens and activists, it was only during last week that a team from the Bombay high court-appointed mangrove committee visited the site.

The team also witnessed destruction of mangrove stretches due to blockage of tidal water. Following the site inspection, CIDCO agreed to get the blockage removed. “We will see for ten days whether the mangroves are rejuvenating after the tidal water reaches the site again,” said Pramod Patil, CIDCO environment officer.