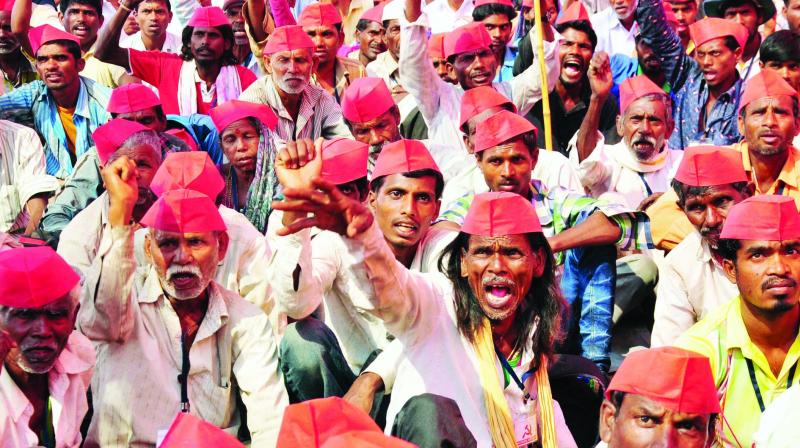 Farmers cheer at Azad Maidan after their demands were accepted by the government. (Photo: Debasish Dey)

Mumbai: On Monday — the sixth day since they had set out from Nashik — farmers reached Azad Maidan at the crack of dawn, around 5.15 am, to press for their demands. Though they had the unbearable swelter to contend with as the maximum temperature rose to a punishing 38 degrees Celsius that day, there was a sense of anticipation in the air with their discussions veering towards talks between their representatives and the government.

They had grabbed the eyeballs of the nation, but the farmers were coy about speaking before the multitude of cameras at the spot.

In morning, they cheered loudly when their leaders Ajit Navale and Jiva Gavit declared that they would go to Vidhan Bhavan to negotiate with the government.

Meanwhile as political leaders kept tricking in, it was seen that farmers were keen on hearing what they had to say. And when group of youths started belting songs associated with the movement, they joined in by clapping lustily.

Around 3 pm, when no word was forthcoming from Vidhan Bhavan, many farmers, especially women, were seen asking media persons about the negotiations. “We hope the march yields fruit. Did you receive any information from the government,” was a common refrain.

At the end of the day, the farmers’ patience was rewarded when three senior ministers along with leaders of the Akhil Bharatiya Kisan Sabha (ABKS) took the stage to the resounding applause of the farmers. The government’s announcement that it would accept all demands was welcomed by one and all. “This is victory for us. We hope that a letter bearing a signature is given by the government so we get our land at the earliest,” said a farmer.

Samrat Sangare :
Samrat Sangare, a youth from Ramabai Ambedkar Nagar, Ghatkopar bought and distributed hundred pairs of slippers to farmers who walked to Mumbai's Azad Maidan from Nashik, a distance of 167km, to protest over agrarian issues. He was moved after watching photos of the protest on social media. The youth is also seeking contributions from people in his area to purchase more footwear.  Photographs of thousands of farmers walking barefoot or with broken slippers went viral on social media. “The sight of elderly men and women walking on cement road in this day and age was itself eye-opening," said Mr Sangare.

Gayatri Chandrakant Jadhav :
Gayatri Chandrakant Jadhav (17), a native of Dindori, has made her maiden visit to the city. The girl, who failed in class 10 exam last year, was present at Azad Maidan with her paternal and maternal grandmothers. "We are tired walking for six days. We expect government to take note of our hardship and give us land," she said.  Ms Jadhav, who flunked in Maths and Hindi, wants to study further. "But what to do? I can't grasp the subjects and can't afford to keep studying at a stretch," she said. Her parents, who are labourers, draw Rs 100 a day if they manage to get work. She too will start working, as her schooling is complete.
Asked about her impression of Mumbai, Ms Jadhav said it is “like dream to be here”. "I have never walked this far in my life before,”she said with a smile.

Lahane Douda:
Much has been said about farmers walking to Azad Maidan late on Sunday night to avoid inconveniencing students taking their class 10 exams. But, a tribal woman from Nashik - Lahane Douda - participated in the march despite her daughters appearing for the exam. "Both my daughters are clever. I want them to study well and become officers. But I can't ignore this march, as it would give us our land,” she said.

Nathu Nivrutti Udar :
A 48-year-old farmer from Ganeshgaon in Nashik's Tryambak tehsil was centre of attention for the media at Azad Maidan on Monday. The reason: he was charging his phone via a solar panel mounted on his head. He also generously allowed other farmers to charge their phones free of cost.  Mr Udar, the father of two children, said. "I want four acres of land in my village. I have come here for it. We filed a form a few years back, but nothing is happening. We were told that the land, which we farmed for years, would be ours after some Act.”