You (government) have ruined the agriculture sector of India. And the march of these farmers is the reaction to it. 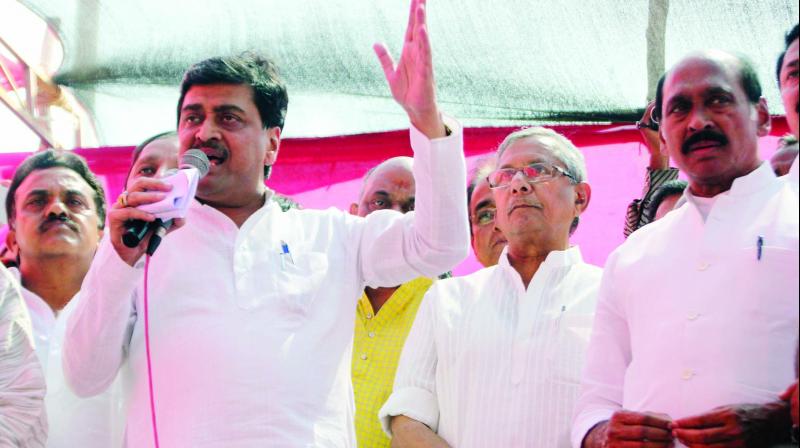 Congress chief Ashok Chavan said that his party would push for the implementation of Forest Rights Act. (Photo: Mrugesh bandiwadekar)

Leaders attacked the government over agrarian problems. Opposition leader in Council Dhananjay Munde and NCP state chief Sunil Tatkare were the first among political leaders to reach Azad Maidan. “You have shown amazing discipline and maturity during this historic agitation. Our party is with you. We will raise the matter in both houses of state legislature,” Mr Munde told the agitating farmers.

Maharashtra Congress chief Ashok Chavan said that his party would push for the implementation of Forest Rights Act. “We made this law in 2006 when we were in power. It is true that there are issues regarding implementation. But we assure you that we will be with you on this issue and also will implement it once we get into power,” said Mr Chavan.

Peasants and Workers Party leader Jayant Patil extended active support to the agitation. He said that the long march was a historic battle against the government which is refusing to listen to the plight of farmers. “What happened to loan waiver is well before us. We had raised concerns over faulty implementation of government’s loan waiver scheme. But the government didn’t listen. This needs to be corrected. And now your protest will make it sure that government would not be able to run away,” said Mr Patil.

Communist Party of India (Marxist) general secretary Sitaram Yechuri also addressed the farmers in the evening. He slammed the Union government over anti-farmers’ policies. “Nirav Modi ran away from India under your nose and you did nothing to him. But farmers are being tortured for their rightful demands,” said Mr Yechur