Facing the heat from the opposition and ally Shiv Sena, the state govt accepted the agitating farmers' demands. 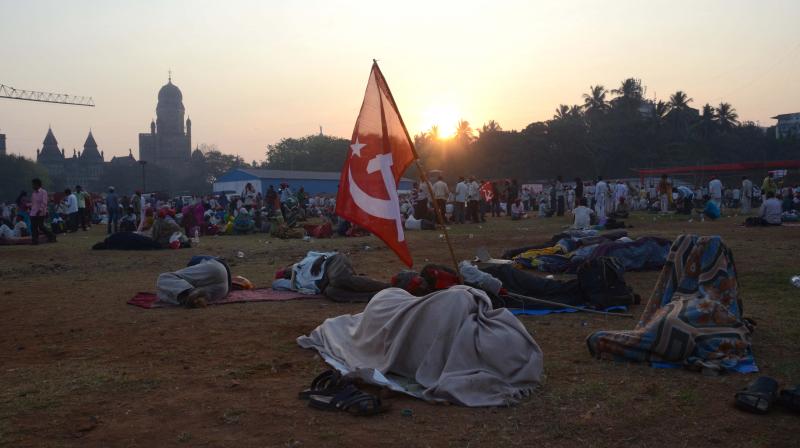 The farmers walked from Nashik to Mumbai under the banner of the Akhil Bhartiya Kisan Sabha (AIKS) of the CPI(M) with a slew of demands, including their right to till forest land and a complete loan waiver. (Photo: Shripad Naik/ Asian Age)

Mumbai: Farmers have given the Maharashtra government a last chance to fulfil the promises made to them, the Shiv Sena said on Tuesday, dubbing their march to Mumbai a "slap" on the face of the BJP-led dispensation.

Facing the heat from the opposition and ally Shiv Sena, the state government on Monday accepted the agitating farmers' demands, including their right to till forest land.

The over 35,000 farmers, who had trekked 180 km over six days from Nashik to here, subsequently called off their stir that had turned Mumbai into a sea of red flags.

"Another jolt from farmers has straightened this government. It had no option other than to accept the demands of the protesters," the Sena said in an editorial in its party mouthpiece 'Saamana'.

"The effect of the farmers agitation was so strong that the government had to give in writing that all their demands would be fulfilled. The government will forever remember the slap on its face by farmers, and nobody in future will try to spoil the lives of labourers," it said.

Lashing out at the government, the Sena said those who came to power using the name of Chhatrapati Shivaji, had merely made announcements in the past three-and-a-half years and forced people to walk for hundreds of kilometres to demand justice.

"This is the last chance given by farmers to this government. It has to fulfil the written assurances given to farmers," the Sena, an ally of the ruling BJP in Maharashtra and at the Centre, said.

The farmers walked from Nashik to Mumbai under the banner of the Akhil Bhartiya Kisan Sabha (AIKS) of the CPI(M) with a slew of demands, including their right to till forest land and a complete loan waiver.

Three senior state ministers - Chandrakant Patil, Girish Mahajan and Eknath Shinde - met the farmers at the Azad Maidan in south Mumbai on Monday and announced the government's decision to accept their demands.