12 demands accepted, panel formed on use of forest land. 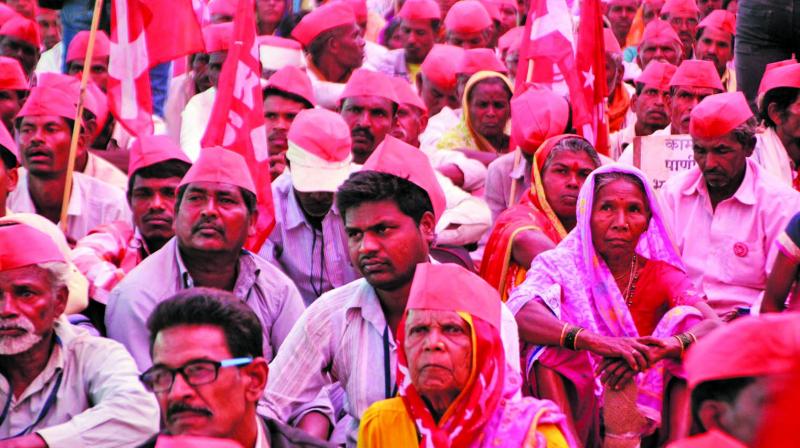 Mumbai: Reeling under pressure from all sides — farmers’ protest, Opposition and ally Shiv Sena slamming the government’s agrarian policies, the BJP-led Maharashtra government on Monday accepted “100% demands” of the agitating farmers, following which the peasants ended their mammoth protest in Mumbai.

The government sought six months time to fulfil the farmers’ demands, including right to till forestland, as thousands of agriculturists converged here in a sea of red.

The main demand was the transfer of forestland titles in the farmers’ name, for which the government sought time to check proofs.

The Communist Party of India (Marxist)’s All India Kisan Sabha, which had organised the 180-km Nashik-Mumbai protest march, claimed victory at the government’s acceptance of all its demands in writing, including the implementation of the Forest Rights Act. 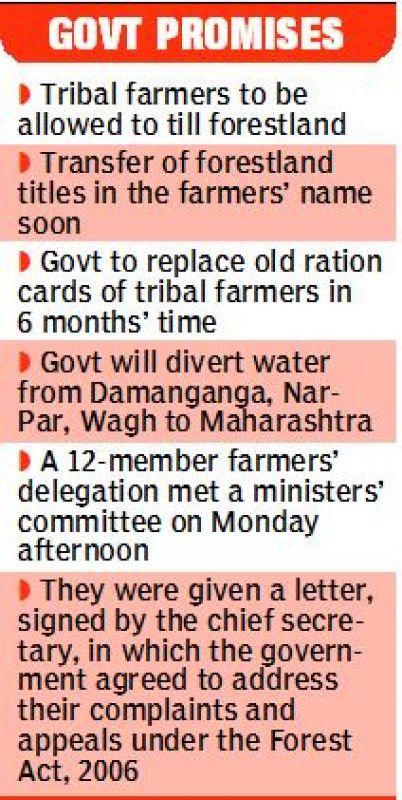 Leaders of the Kisan Sabha showed the written reply by chief secretary and three senior ministers at Azad Maidan. Almost 30,000 farmers had assembled at Azad Maidan when the ministers accepted their demands.

A delegation of farmers’ leaders had met chief minister Devendra Fadnavis in the afternoon. The government agreed to a few demands and asked for some time. “The main demand was about transferring forest land titles to their names. We have agreed to expedite the process but it takes time to verify the proofs. We have sought six months to clear the claims and also the pending appeals. So far, the government has completed 50 land transfers,” said tribal welfare minister Vishnu Savara.

MLA Jiva Gavit expressed victory of the farmers protest. “We walked for six days. Something like this had never happened here. The government has accepted our main demand of forestland rights. The CM will make a statement in the Assembly on Tuesday,” said Mr Gavit.

The written assurance given by the government includes renewal of rations cards of the tribal since many are denied grains in ration shops as their rations cards are in bad shape. Another demand was about diverting water from Nar-Par, Damanganga, Wagh and Pinjal to Maharashtra so that it does not go to Gujarat.

“A project in this regard has been prepared by the National Water Development Authority. A MoU has also been signed which the government will implement,” the agreement said.

All India Kisan Sabha’s leader Ashok Dhavale said the government has agreed to complete irrigation work in the next five years. “The tribals will get benefits of the projects,” said Mr Dhavale.

However, the government did not give any assurance on the demand for complete loan waiver to the farmers and giving 1.5 times the market price to agriculture produce. “In the state, 35.51 lakh farmers have received loan waiver of Rs 13,826 so far. The government will pursue the demand of 1.5 times price to agriculture produce with the Centre,” the agreement said.

Farmers’ leader Ajit Navale said that earlier there was a criteria that allowed only one person to get benefits of the loan waiver. “This is now changed. Any number of accounts from a single family will get the loan waiver. The limit of money will be Rs 1.5 lakh. This demand has been accepted,” Mr Navale said.

On increasing aid of various government schemes like Sanjay Gandhi Niradhara Yojana, Shravanbal Indira Gandhi Vrudhhapkal Yojana to Rs 2000, the government said it would positively look into the matter. On compensation of Rs 40,000 per acre for pink bollworm and hailstorm, the government said that a decision has already been taken. There was also a demand for transferring class-III temple land, benami land, gairan land on the tribal name if they are cultivating it.