Mr Bharti added that the police also dispersed protesters in a peaceful manner. 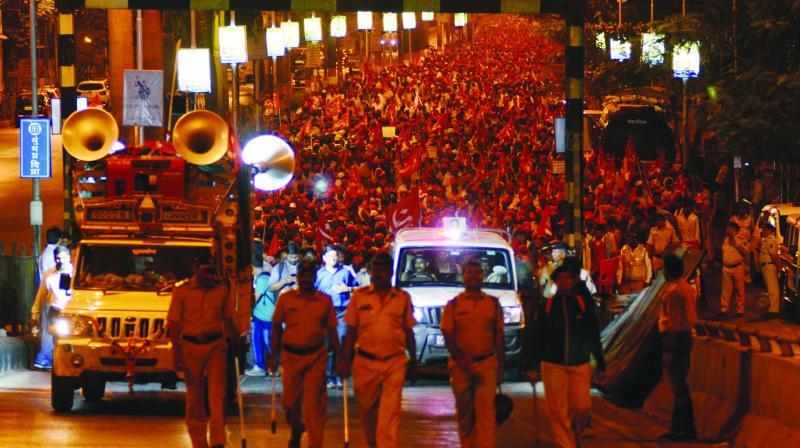 The police personnel was deployed on the streets from Sion to Azad Maidan. (Photo: Shripad Naik)

Mumbai: With the Mumbai police deploying nearly 15,000 men – drawn from the department as well as the State Reserve Police Force and the special Quick Response Team – no untoward incident occurred during the farmers’ protest march on Monday. The police personnel was deployed on the streets from Sion to Azad Maidan. Not only was the occasion peaceful, no traffic diversion had to be made either.

A senior police officer who did not wish to be named said that there was heavy deployment and a large number of police personnel were present in and around Azad Maidan to prevent any inappropriate incident. The area was barricaded and there was also a heavy bandobast outside CSMT station since Sunday night to avoid any law and order situation. Deven Bharti, joint commissioner of police (crime), said, “Some more farmers were expected to join the march from neighbouring districts. However, the police personnel were on their toes and prepared to maintain law and order.” Mr Bharti added that the police also dispersed protesters in a peaceful manner.

Deepak Deoraj, deputy commissioner of police (operations) and Mumbai police spokesperson, said, “The march went extremely smoothly and there was absolutely no problem or law and order situation that the police had to deal with. The entire Mumbai force was on duty and no untoward incident was reported.”

Over 15,000 policemen were deployed, along with personnel from the State Reserve Police Force, Quick Response Team, Anti-Terrorism Squad and Riot Control Force, not to mention the Sniffer Dog Squad, in areas including Colaba, Marine Drive and Malabar Hill, said a senior officer.

Amitesh Kumar, joint commisioner of police (traffic) on Monday said, “No roads were or will be closed due to the protest march by the All India Kisan Sabha farmers. There were no diversions or closures of roads, and the city’s traffic was handled smoothly.”