Drones to crack down on Thane’s hooch dens

Drones have begun conducting sorties in Bhiwandi’s mangrove-rich creek tracts where most such factories are suspected to operate. 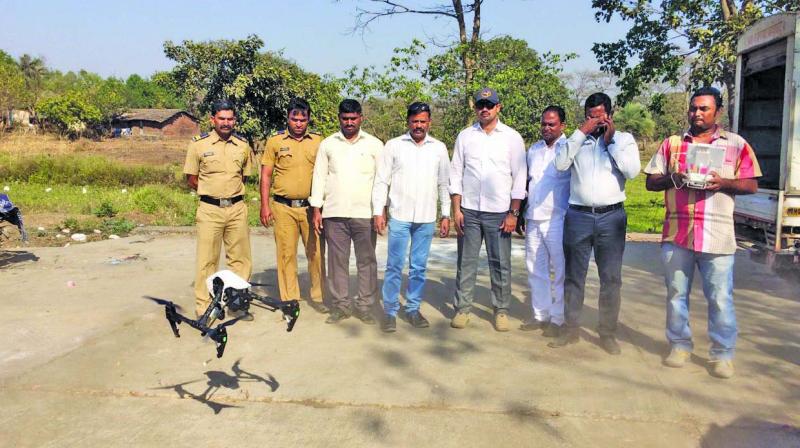 Mumbai: Seeking to crack down on illegal country liquor dens in remote, forested tracts in rural parts of Thane district, the police has acquired three unmanned aerial vehicles or drones and set up a dedicated team of officers to operate them.

The drones have begun conducting sorties in Bhiwandi’s mangrove-rich creek tracts where most such factories are suspected to operate.

Apart from revealing the locations of such dens, the drones are expected to collect photographic evidence against them, said police sources.

Thane rural SP Mahesh Patil initiated the idea to stop the liquor dens in villages near Bhiwandi. According to the police, an eight-member team along with a drone expert will locate the dens. “We have taken this initiative to completely eradicate the such dens. Our officials walk 15 to 20 kilometres in the forest area of Bhiwandi to search for such dens but unfortunately some times the accused flee when they get a whiff of our activities. With drones we will get the exact location of the dens and we can click pictures of the accused and arrest them easily.”

Speaking about the team’s operations, Dhanaji Kshirsagar, SPI Bhiwandi rural police station, said, “We have private individual, who is an expert on drones. Apart from him eight officers are working on the project. Two police officers accompany the drone handler at all times and other officers are scattered in the area where the search is to be held. We started operations on Sunday and checked three villages so far.”

API Raju Patil, who is part of the team, said it was great experience. “It has now become so easy to visit the spot where the dens are operating. We got their location via GPS after we surveyed the area using drones. We visited two to three places where we seized the equipment that the accused had used. Soon we will bust the racket completely and make arrest. We will conduct such activities thrice a week.”