Nanar refinery work to start in ’20

Company says have received consent of 30 to 40 per cent locals. 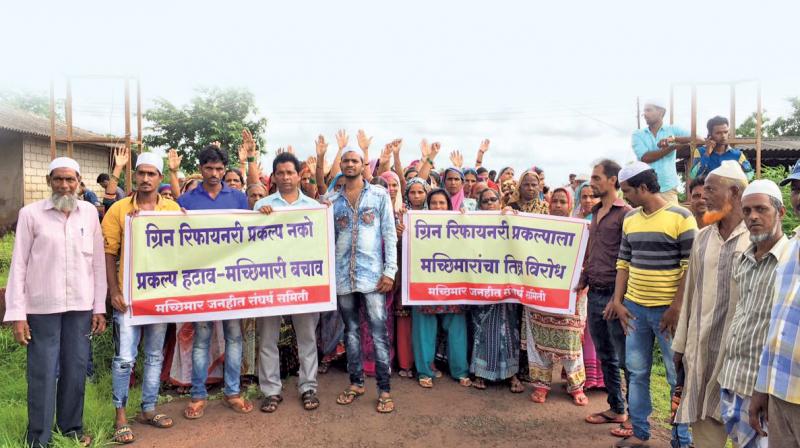 Locals, farmers and fishermen have fiercely protested the refinery project at Nanar.

Mumbai: Despite the state government ordering a stay on land acquisition project, the Ratnagiri Refinery and Petrochemicals (RRPCL) has said that the physical work of the proposed Nanar refinery pro-ject is likely to start from January 2020 and the project will be completed as per schedule in 2025.

Locals, farmers and fishermen have fiercely protested the refinery project at Nanar. Shiv Sena, the alliance party in the state government, has also opposed the project. Taking note of this, chief minister Devendra Fadnavis had issued a stay on land acquisition for the project in the recently held winter session of the State Legislature.

“The company has alre-ady received consent from 30 to 40 per cent of the locals and the work will be completed as per schedule in 2025,” RRPCL chief executive B. Ashok said.

“We are going ahead with the project and we are in continuous dialogue with the land owners trying to spread awareness about the benefits of the project, which will not just change the face of the industry but also the district, state and the country as a whole,” Mr Ashok added.

The 60-million tonne per annum refinery-cum-petrochemical complex is estimated to cost Rs 3 trillion, and will come up in over 15,000 acres in Ratnagiri and Sindhudurg districts.

Nearly 14 villages and 850 families are likely to be affected due to the project. The locals, farmers and fishermen are likely to lose their livelihood. Apart from Shiv Sena, the other opposition parties have also opposed the project.

The project, to come up at Babulwadi village, would be the world’s lar-gest green-field refinery-cum-petrochemical complex when commissioned and would require 15,000 acres, which need to be acquired from farmers.

State-owned oil refiners – Indian Oil Corporation, the Oil and Natural Gas Corporation-owned Hindustan Petroleum and Bharat Petroleum – jointly own 50 per cent in the project, while Saudi Aramco and Abu Dhabi National Oil Company own rest of the equity.