Maharashtra to be drought-free by 2019, says CM Fadnavis

In its third year, the Satyamev Jayate Water Cup 2018 will see 75 talukas from 24 districts participate. 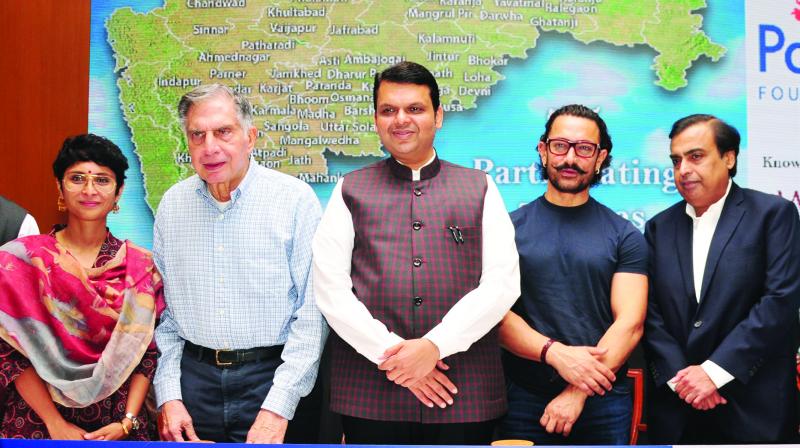 Mumbai: Chief Minister Devendra Fadnavis on Friday said that Maharashtra would be drought free by 2019 because of measures undertaken by the state government and NGOs like Bollywood actor Aamir Khan’s Paani Foundation, in the irrigation and water conservation sector. He was speaking at the launch of the actor’s ‘Satyamev Jayate Water Cup 2018’ to laud efforts for water-conservation in the state.

On behalf of his foundation, Aamir revealed that the competition would be held in 75 talukas from 24 districts in the state. Senior industrialists like Mr Ratan Tata, Mr Mukesh Ambani, the president of the Jain Seva Sangh, Mr Shantilal Mutha and state minister Jaikumar Raval were present at the launch of the Water Cup at Sahyadri guest house.

Mr Fadnavis explained the concept and importance of the Jalyukta Shivar scheme. He said that water conservation and rejuvenation of natural water fronts work is more important than irrigation projects as it also increases the level of underground water.

This is the third year of the competition and Aamir has been travelling across hundreds of villages in the state spreading awareness and training villagers in water conservation methods. The Tata Trust, and the Reliance Foundation are helping in this project.

The Paani Foundation is training the people of the villages on how to develop and protect water resources as well as providing help for projects. Villagers are working on their own initiative and the government is also helping through various schemes.