The chopper, Dauphin N3, bearing registration number VT-PWA, took off from Juhu at 10.25 am, with 5 ONGC employees and 2 pilots on board. 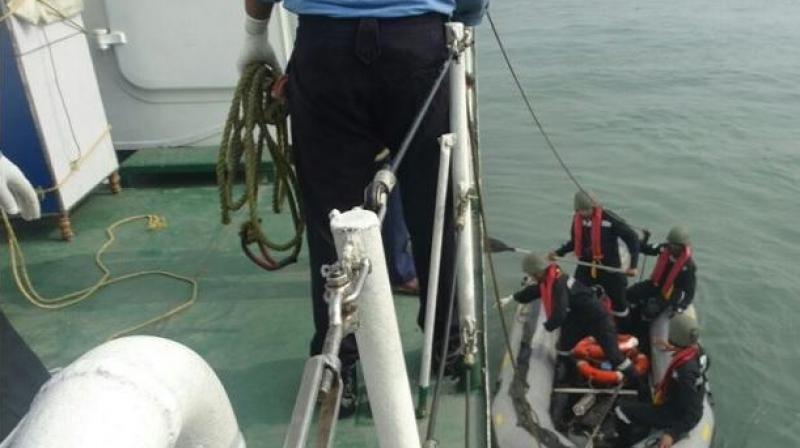 The Navy said it had deployed its stealth frigate INS Teg for the search operation while surveillance aircraft P8i is also being press into service. (Photo: ANI | Twitter)

Mumbai: Two senior officers of ONGC are feared to have been killed along with three others in a helicopter crash off Mumbai on Saturday.

A Pawan Hans helicopter, which was heading to ONGC's north field with seven people on board, went missing off the Mumbai coast, official sources said.

Speaking on the matter, Dharmendra Pradhan said, "Navy & Coast Guard are on their job. I am also going to Mumbai to coordinate things.I will discuss it with Defence Minister. She is also cooperating and has instructed Navy and Coast Guard to look into the issue extensively".

The chopper, Dauphin N3, bearing registration number VT-PWA, took off from Juhu aerodrome at 10.25 am, with five ONGC employees and two pilots on board, they said.

The chopper was scheduled to land at the designated oil rig at Mumbai High at 11 am, the sources said. Search operations are on, they added.

The Navy said it had deployed its stealth frigate INS Teg for the search operation while surveillance aircraft P8i is also being pressed into service.

The Indian Coast Guard has tweeted about the identification recovered from the debris.

Two bodies out of four recovered at sea near debris of ill feted @ONGC_ Aircraft identified by the cards in wallet @SpokespersonMoD pic.twitter.com/yG8dQ0t6Nx

Sad to learn about Pawan Hans helicopter crash off the coast of Mumbai. Thoughts with families of those who have lost their lives #PresidentKovind