Incident took place at around 11am when Ghodeswar, who works as house help took a brief break before reaching her next destination to work. 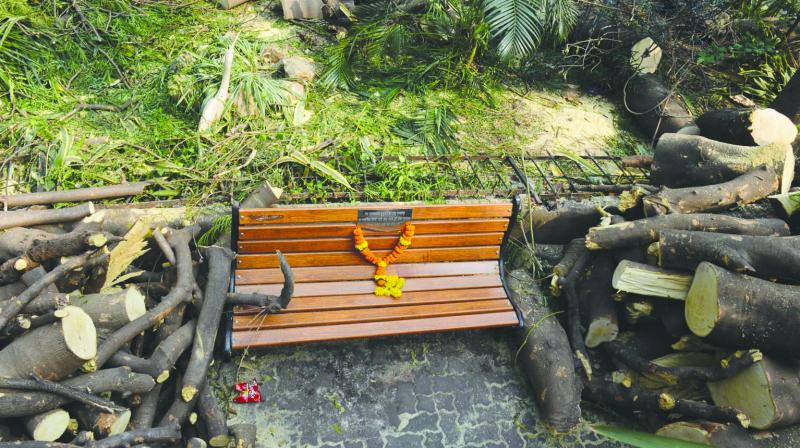 File picture of the place where the woman was killed.

Mumbai: The Govandi police are set to write to Konkan Krishi Vidyapeeth (agricultural university) in Dapoli seeking their opinion on the tree that collapsed, killing a woman on December 7 in Chembur. The police had found that the trunk of the tree was allegedly damaged in a particular way that could mean  that it was tampered with.

Officials said that one of the aspects of the investigation is to take an expert's opinion to ascertain if the alleged sabotage was the reason for collapse. The expert’s report will be used as a piece of evidence in the case citing that there were two incidents of tree falling killing two women, police said.

The investigation began after 45-year-old Sharada Ghodeswar, who was sitting on a bench near Chembur’s Diamond garden, was killed after the tree came crashing on her. The incident took place at around 11am when Ghodeswar, who works as house help took a brief break before reaching  her next destination to work.

“We have kept the roots of the collapsed tree intact (at the spot) and have also kept samples of the trunk which looked as if have been sabotaged. There are various departments in the agricultural university that can study the specifics and come to a conclusion,” said a senior police officer at Govandi police station.

The officials have also asked for details of when the tree was last pruned along with its stability report from the Brihanmumbai Municipal Corporation (BMC). The police are meanwhile scanning through the CCTV camera footage of several days to find more evidence. The statements of the locals are also being recorded for further clarity.