Vehicles lying on the roads for more than two days will be towed. 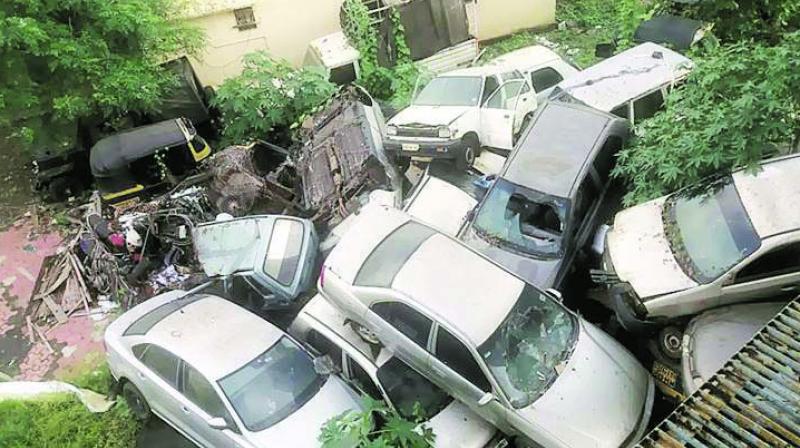 The civic official said the seized vehicles can be retrieved within 30 days after paying the fine. (Representational image)

Mumbai: Leaving your vehicle on roads for more than two days can cost you dearly. The Brihanmumbai Municipal Corporation (BMC) has formed a policy for abandoned vehicles, under which it will seize the vehicle after two days. You can retrieve the vehicle only after paying a hefty fine.

According to civic officials, the seized vehicle can be retrieved within 30 days after paying the fine. But failing to do this, the civic body will auction the vehicle. The 30-day fine amount for two-wheeler and four-wheeler vehicles is `10,000 and `15,000 respectively.

To expedite the action against abandoned vehicles, the civic body has increased the number of towing vehicles from six to 10. “The shortage of towing vans used to be a major deterrent in action against such vehicles. However, now seven towing vans will be stationed in each of the seven administrative zones. Along with this, one extra van will be made available in administrative zones number 2, 4 and 5,” said a senior civic official.

According to municipal rules, the BMC takes action against abandoned vehicles by first issuing notices and later picking up and seizing them.

To streamline the process, the encroachment removal department has prepared guidelines, under which engineers of maintenance department will regularly survey vehicles, which are abandoned in their areas.

“The civic body will first attach notice on these vehicles as per municipal rules. If the said vehicle is not retrieved by the concerned party within two days, it would be deposited to the municipal godown. Following this, the party can still retrieve the vehicle within 30 days by paying the necessary fine. However, after the one-month period is over, the BMC will auction the vehicle,” said the official.

If any abandoned vehicle is found in your area, you can register a complaint at the respective ward office or on the 1916 telephone number. Apart from this, you can also send your complaint on municipal websites www.mcgm.gov.in or portal.mcgm.gov.in