The couple are residents of Yogi Nagar in Borivali and were out on their first joyride in a helicopter. 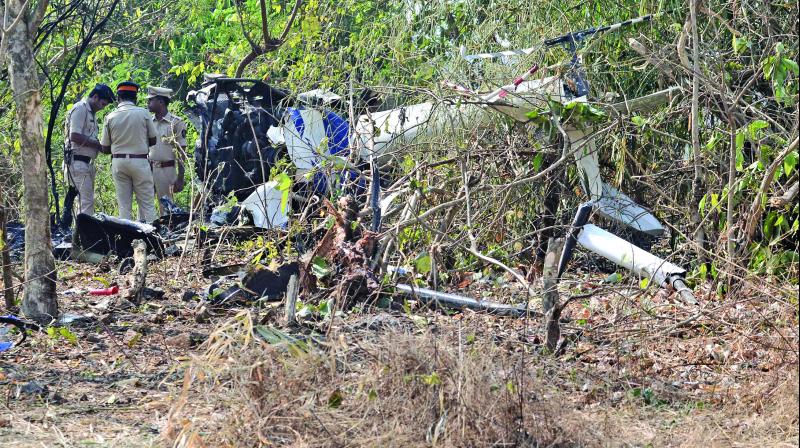 Policemen inspect the site of the crash. (Photo: Shripad Naik)

Mumbai: Within minutes of Aman Aviation’s helicopter crash-landing at Filter Pada in Goregaon’s Aarey Milk Colony on Sunday morning, locals used whatever they could find, including sickles, to extricate the four passengers and wrapped them in bed sheets before rushing them to Seven Hills Hospital in Andheri (east) in an ambulance.

While the pilot Praful K. Mishra, a resident of Chandivali, was declared dead on arrival, the three others were immediately admitted. Of them, a couple — Vrinda and Ritesh Modi — are said to be critical.

The couple are residents of Yogi Nagar in Borivali and were out on their first joyride in a helicopter on Sunday when the aircraft crashed due to mechanical reasons. They have a four-year-old girl. Ritesh Modi’s cousin said, “This was the first ever time that Vrina and Ritesh had sat in a helicopter. This is a huge tragedy that has happened in the family. We are just hoping that they recover soon.”

Sanjeev Shankar, the other injured victim, was the attendant of the aircraft and had joined the company only a few days ago. He belongs to Bihar originally and has sustained fractures in his ankle and wrist.