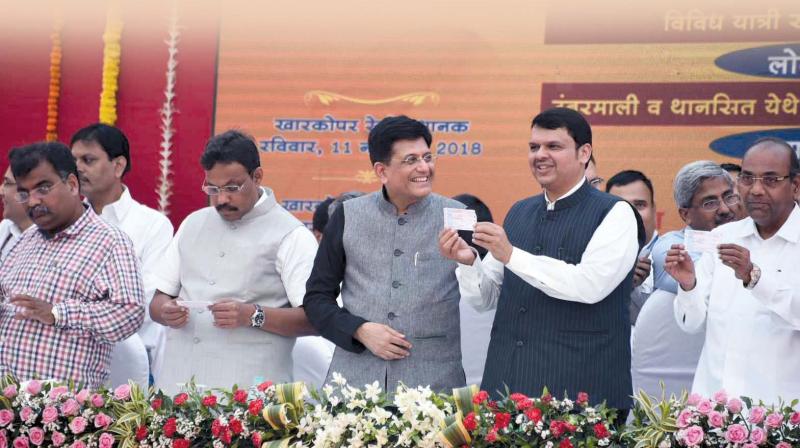 Mumbai: At the pace, the development of Mumbai, Navi Mumbai, Mumbai Metro-politan Region (MMR) are being done in Raigad district, we will have to develop them as ‘Maham-umbai’, said chief minister Devendra Fadnavis while dedicating the fourth suburban section between Kharkopar and Nerul or Belapur CBD to citizens on Sunday.

The mobility plan for ‘Mahamumbai’ would be chalked out for better connectivity. Mr Fadnavis said that in the modern era transportation and mobility plays a key role in human habitation. “During earlier days of civilisation, people would settle near rivers where they could easily get water. But now, people have started habituating places which are equipped with means of transport and mobility,” he said.

Mr. Fadnavis also claim-ed that the development works that have been do-ne in last four years had  not happened in last 70 years. He also recounted the works of last four ye-ars in the railway. Several hoardings of Mr Fadna-vis and Mr Goyal have been erected by local MLA Prashant Thakur on Kharkopar road or K.N. Gharat Marg.

Mr. Fadnavis said, “On an average, the state received Rs 1000 crore annually from the Union government, during 2009 to 2014. Now, we are getting Rs 4500 crore annually. It means that the centre is giving four times more than what the last government gave.”