Until last year, people sacrificing animals had to physically carry the meat for several metres. 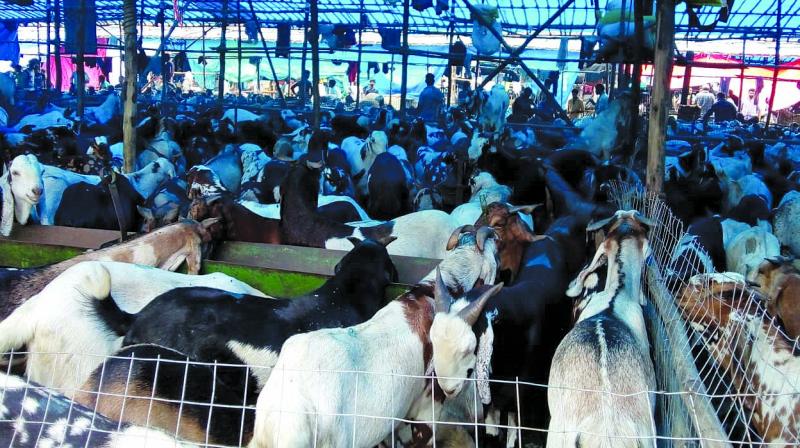 Thousands of goats are seen at Deonar Bakra Mandi, the city’s largest abattoir on Sunday ahead of Bakri Id. The festival this year will be celebrated today. The authorities, for the first time, are also providing steel trollies to transport meat and various other facilities have been newly intoduced.

Mumbai: In order to improve the hygiene situation at Deonar, which was highlighted in a petition in the Bombay high court, the authorities, for the first time, are providing steel trollies to transport meat.

Until last year, people sacrificing animals had to physically carry the meat for several metres to their vehicles, which prevented many people from going to abattoir due to health restraints. This facility, among others, is expected to draw more visitors to the slaughterhouse.

“We will be providing steel made trollies during three days of Id at Deonar abattoir to carry meat as it will be more convenient and hygienic,” said Deonar GM Dr Yogesh Shetty.

The Brihanmumbai Municipal Corporation (BMC) has also introduced barcodes on receipts and banking facilities in Deonar abattoir to safeguard livestock and prevent farmers from getting fleeced.

Mr Shetty said, “This year the BMC has introduced unique barcode system on receipts, that allows buyers to take animals out from the abattoir. The civic body has also issued identification cards to sellers. The step has been taken to prevent theft cases of animals.”

He explained that when a barcode is scanned at the entrance the computer displays all the details about the seller and the animal. It will also record the amount of animals bought and remaining with an individual seller.

The Deonar GM also said that in the past, th-ere have been instances where cash were stolen from farmers and dealers coming to Deonar for selling trade animals.

The thieves are generally well aware that a seller usually has good amount of cash in hand. To avoid such cases, the BMC has introduced banking system inside Deonar abattoir.

This system not only allows money to be transferred directly to the bank accounts but also provides an option of opening an account on the spot if a seller does not have one. This reduces the chance of cash theft and is also secure.