The legislators had been staying at Renaissance Hotel in Powai. 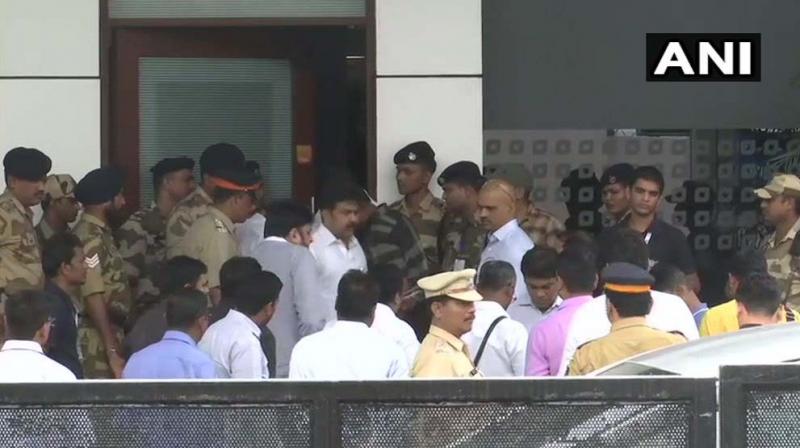 The legislators, who had been staying at Renaissance Hotel in Powai, left the hotel at 2 pm and reached Chhatrapati Shivaji Maharaj International Airport. (Photo: ANI)

Mumbai: It finally took a Supreme Court order to end the high-voltage Karnataka political drama in Mumbai. Following the apex court’s directives asking the dissident legislators, who were put up in Mumbai, to meet the Assembly Speaker by 6 pm, they flew back to Bengaluru by special flights.

The legislators, who had been staying at Renaissance Hotel in Powai, left the hotel at 2 pm and reached Chhatrapati Shivaji Maharaj International Airport. At 2.50 pm, they flew back to Bengaluru by two eight-seater charter aircraft. BJP Maharashtra vice president Prasad Lad and youth wing chief Mohit Kamboj were also present at the airport with the rebel MLAs.

Byrathi Basavaraj, one of the rebel MLAs, said that none of the sixteen MLAs would withdraw their resignations and denied that the BJP was behind their decision. He added that their decision was not spontaneous and that they were unhappy with the coalition government, but the party leadership did not heed their protests earlier.

Another Congress MLA, S.T. Somashekar, said, “We still support the party as we respect our leader Rahul Gandhi. But the commitment made by the coalition government could not satisfy us. We did not take the decision all of a sudden. We had informed the party earlier, but they did not care.”

Mr Somashekar, however, criticised the government for ignoring his concerns regarding the Bengaluru Development Authority – an institution that he heads. “It is only in the last three days that the government has become active in solving our issues. Why did they not care about us before? You imposed an IAS officer on the BDA to scrutinise me. When the government takes such decisions, we don’t need it,” he added.

Karnataka has been facing political instability ever since the Congress and the Janata Dal (Secular) came together to form a coalition government in May 2018.

In the 2018 election, the Bharatiya Janata Party had emerged as the single largest party with 104 seats, while the Congress was restricted to just 80 seats. JD(S) came third with 37 seats.