Roy, a teetotaller and fitness enthusiast, was battling bone marrow cancer for many years. 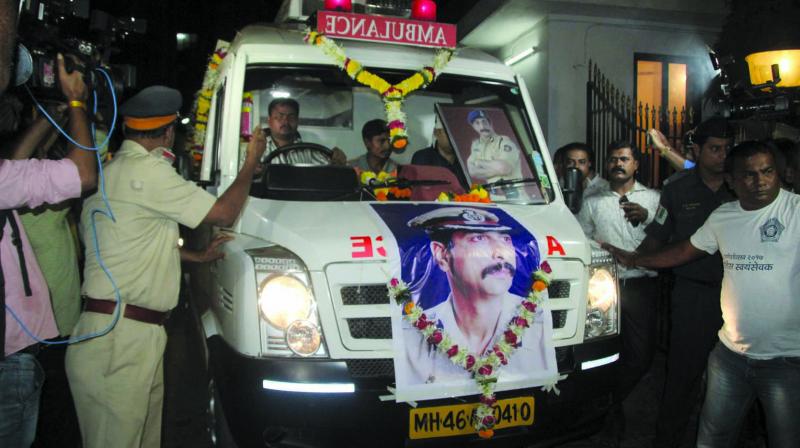 Mumbai: A day before he shot himself on Friday afternoon at his south Mumbai residence, additional director general of police (establishment) Himanshu Roy (54) had told an acquaintance over phone that he was experiencing an ‘unbearable pain’ in course of the treatment he was taking for bone marrow cancer and that he had been on drip for the past two days, said a police officer on Friday.

Roy, who was on sick leave for the last two years, had kept in touch with his colleagues, and some would visit Siddhivinayak temple at Prabhadevi, where he usually turned up each Tuesday to seek the deity’s blessings, to catch up with him.

The 1988 batch IPS officer, who was known for his daring and who always boost the morale of junior colleagues, had attracted attention early in his career when during a stint in Nashik. He had chased and caught hold of his attackers, who had inflicted injuries on him with their sharp weapons, said retired assistant commissioner of police Jaywant Hargude.  “I met him several times at the Siddhivinayak temple and found him to be brave in the face of suffering,” said assistant commissioner of police Sunil Deshmukh.

Roy was a teetotaller, fitness enthusiast and someone with a penchant for Hindustani classical music. Over six-feet tall, muscular and possessing a dramatic moustache and a rich baritone, Roy stood out with his personality, but it all came apart when he was diagnosed with cancer. In the end, the immense suffering probably led to “a sense of helplessness” that drove him towards the extreme step, said another officer.

Former DGP and ex-Mumbai police commissioner Arup Patnaik, while lamenting the loss of the “brilliant officer”, said, “The last I met him was three months ago. He told me that cancer had travelled to his brain and sought help in getting an appointment with doctors. Though the doctors had advised a surgery, he said he would go for medication instead.”

Roy was appointed joint commissioner of police Mumbai in 2009 and is credited with setting up Mumbai’s first cyber crime cell, the women’s cell, and taking anti-dacoity measures in rural Maharashtra.

Former DGP A.N. Roy was the Mumbai police commissioner when the deceased was the DCP (zone 1) in south Mumbai. “As an IPS officer he had an additional asset, he was a qualified chartered accountant and used the approach that comes with it. I was in touch with him at the time he was battling the disease. He would at times be despondent but then got upbeat again,” the former top cop said.

Himanshu Roy was known for not only being a soft-spoken officer but also for his investigation skills. Here are some of the major cases where he played an important role.

The Indian Premier League (IPL) spot-fixing case came into light in 2013 when the IPL was going on and it was Roy who was responsible for the arrest of Vindu Dara Singh for allegedly betting on IPL matches. According to the police case, Singh allegedly had links with bookies who were involved in the spot-fixing scandal. Roy was also responsible for the arrest of Gurunath Meiyappan, son-in-law of former ICC president N. Srinivasan and owner of the Chennai Super Kings franchise in the same spot-fixing case. These persons were later released on bail and the trail in these cases are still pending before the concerned courts. He also probed cricketer Sreesanth in connection with the fixing scandal.

He was also part of the investigation team that cracked the 2012 double murder case of aspiring producer Karan Kumar Kakkad and Delhi-based businessman Arun Kumar Tiku. The police managed to nab a small-time model, Simran Sood, and her husband Vijay Palande in the murder case. According to police, Palande had become friends with Anuj, son of Tiku, a couple of years before the murder and he had plans to take over three flats clubbed into one. However, when Arun flew down to Mumbai from Delhi, Palande felt his plans would fail and hence he got Tiku killed. Sood and Palande also befriended Kakkad to allegedly grab his property. The trial in these cases is going on.

Roy played an important role in investigation of the 2011 murder case of senior journalist J. Dey. The police team under Roy’s guidance was able to collect enough evidence that led to the conviction of deported gangster Chhota Rajan and his associates including the individual who opened fire at Dey. Four bikers had targeted Dey on June 11, 2011 at Powai when Dey was returning to his home. The prosecution was able to prove that Rajan was annoyed with Dey’s writing. Rajan was of the view that Dey was portraying him in a poor light that would hurt his image as a gangster and hence he ordered his killing.

Roy also investigated the murder of young Mumbai lawyer Pallavi Purkayastha, the daughter of Delhi-based IAS officer Atanu Purkayastha. Pallavi was also an advisor to filmmaker Farhan Akhtar’s firm Excel Entertainment. The prosecution was able to prove that security guard of Pallavi’s building Sajjad Mughal sneaked in her room using a stolen key. He also attempted to rape her but when she fought back he stabbed her repeatedly before slitting her throat and fled from the spot. The trial court in 2014 sentenced Mughal to undergo imprisonment for life. Mughal had jumped parole but was caught again.

During his tenure as head of the Anti-Terrorism Squad, Roy was instrumental in probing some of the terror cases too. He arrested software engineer Anees Ansari for allegedly planning to blow up the American School in Bandra-Kurla Complex (BKC). Police had arrested Kurla-based Ansari in October 2014. The police in the chargesheet relied heavily on Ansari's Facebook chats with a foreigner to prove that he was conspiring to kill American nationals in India. These chats also revealed that he was allegedly exploring the use of flamethrower in the attack. Due to his objectionable chatting his almost 10 Facebook accounts were blocked. The trial against Ansari is also pending before the court.