Parents and activists have also decried the lack of regulation for bus fees that bus operators collect every month. 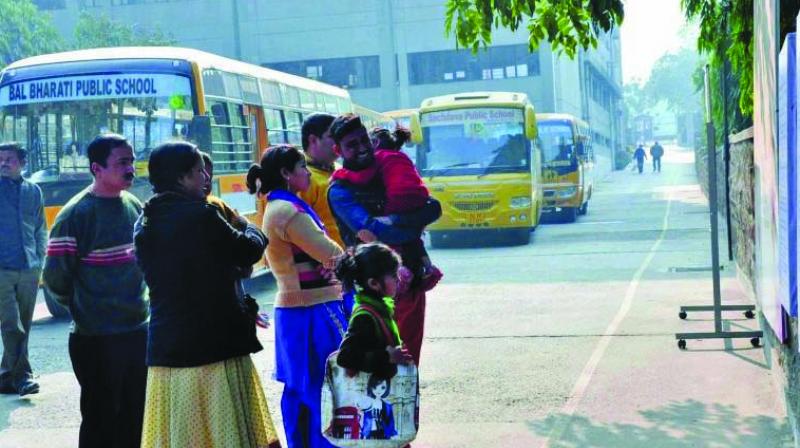 School bus owners have said that will put an end to illegal and unsafe vehicles plying without RTO permits, but parents have said they find them economically affordable.

Mumbai: The recent Bombay high court order asking the state Regional Transport Office (RTO) authorities to implement the amendments in school bus safety norms, which require taking the RTO permit and the police’s no objection certificate (NOC), for vehicles ferrying children to and from schools has drawn a mixed reaction from the stakeholders.

While school bus owners say it will put an end to illegal and unsafe vehicles like rickshaws and vans that ply without RTO permits and NOCs, parents feel that the same vans and rickshaws currently ferrying their children are more convenient and economical than large school buses.

Parents and activists have also decried the lack of regulation for bus fees that bus operators collect every month. The parents say it is more economical to send their children in vans or rickshaws. School principals, meanwhile, said issues pertaining to the safety of the children and their mode of transport should be dealt with by government
authorities.

Alternate modes of transport unsafe, but convenient
While the School Bus Owners Association (SBOA) has welcomed the court order as it makes adhering to safety norms mandatory for all vehicles, parents have a different outlook to the issue. According to them, school bus safety does not end within the bus, but needs to be seen on a larger scale.

“School buses cannot go into small lanes and hence children are dropped off on the main roads. Often children have to side-step the heavy traffic to cross the roads, which is very scary at times,” said Saurabh Gupta, parent.

“Though vans and rickshaws do not have as many safety features as school buses, the fact that they drop off children on the door step is a major plus point,” said Mr Gupta, businessman from the western suburbs.

No fee regulation for school buses
According to parents, the fees for school buses are fixed — regardless of the distance between the house and the school concerned. As a result, they have to pay a fixed amount every month. A case in point being a private school bus provider in Bandra charging Rs 2,500 per month from children living within a radius of a kilometre. The same amount is also charged from a student coming from Khar or Mahim or even further.

“This is more economical and affordable. However school buses have a fixed rate, which can at times be exorbitant,” said Mr Dokras, a public relations executive from the eastern suburbs.

SBOA president Anil Garg however justified the fixed charge, saying, “Adhering to the regulations being introduced from time to time increases the operating costs, hence we have no option but to recover it from the parents. School buses also have to pay charges for renewal of permits, having a woman attendant, upkeep for CCTV cameras installed in the buses, etc every year, which the vans and rickshaws do not have to.”

Petition asks for authorities to enforce norms
The HC order was in response to a petition that sought to ensure that the authorities should not issue permits unless there was a common standard agreement between the school and the service provider, whether they are buses, vans or rickshaws.

The petition said the same was being flouted by the authorities.

The petition also prayed to cancel the permits granted earlier, if the operators do not have an agreement with the school.

We satisfy a demand: Vans and rickshaw owners
Van operators and rickshaw drivers hold that they are in the business of providing services as there is a demand for the same. As many providers have permits, they have to get the vans painted in the stipulated colours as well as adhere to certain norms. However, rickshaws do not comply with any norms as they provide the service part-time.