The campaign was launched during the inauguration of Mr Gaikwad’s campaign office at the hands of Mumbai Congress chief Milind Deora on Thursday. 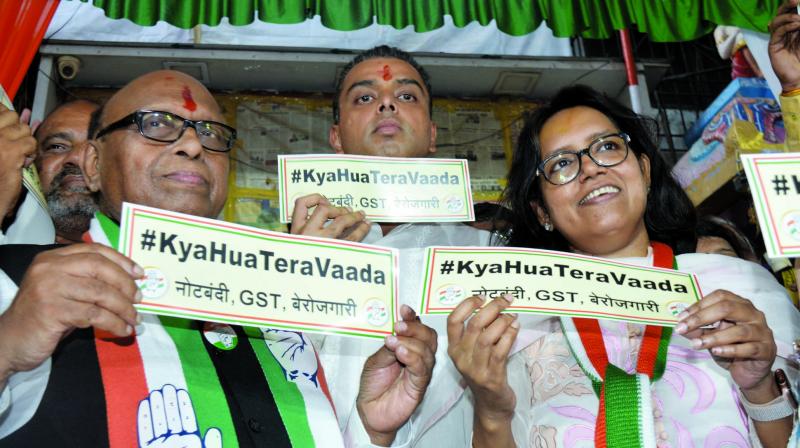 Mumbai: The Congress has started its ‘Kya Hua Tera Vaada’ (what about your promises) campaign in the south-central Mumbai constituency to highlight the “failure” of the Shiv Sena MP Rahul Shewale in solving the problems of the people of Dharavi.

Eknath Gaikwad, who is contesting as a Congress candidate, said, “Due to the Central government’s decisions of demonetisation and GST, the leather and cloth industries in Dharavi have suffered huge losses and many of them have shut down.”

He further added that while common people suffered immensely, Mr Shewale failed to raise their issues in parliament by keeping mum. “Hence, the Congress has started its ‘Kya Hua Tera Vaada’ campaign in the south-central Mumbai constituency,” he added.

“Wherever the MP will be seen in the constituency, the voters will question him, ‘Kya Hua Tera Vaada’. We will also distribute stickers with this slogan,” said Mr Gaikward.

The campaign was launched during the inauguration of Mr Gaikwad’s campaign office at the hands of Mumbai Congress chief Milind Deora on Thursday.

Mr Gaikwad said “In the last five years, the ruling parties have betrayed the people from Dharavi. Promises like the redevelopment of Dharavi, construction of an industrial hub were made, but no efforts were made to fulfill them. Due to demonetisation and GST, the small-scale industries in Dharavi have been destroyed, while other industries have been suffering financially. Despite this, Mr Shewale did not raise a single question on the plight of Dharavikars in Parliament. As the Dharavikars are seething with anger, we have decided to give vent to it with the help of this protest.”