NCP leader Ajit Pawar claimed that the BJP’s downfall had started and by-poll results in the state as well as on national level indicate this. 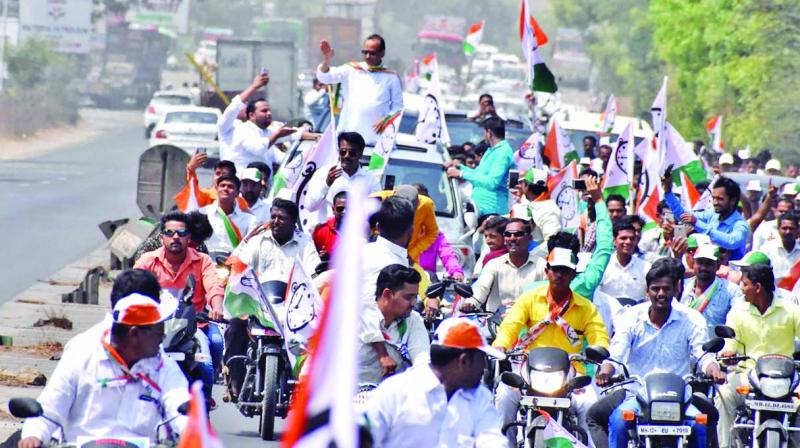 ‘Halla-Bol Yatra’ in its bastion to sharpen the attack on BJP.

Mumbai: The opposition Nationalist Congress Party (NCP) is using its ‘Halla-Bol Yatra’ (shaming march) in its bastion of Pune to sharpen the attack on the ruling Bharatiya Janata Party (BJP).

NCP leader Ajit Pawar claimed that the BJP’s downfall had started and by-poll results in the state as well as on national level indicate this. He also showed the video clip of the BJP’s assurances to the people before the 2014 elections and called the government ‘feku sarkar’ as it had failed to meet the assurances.

Meanwhile, the NCP is trying to reach all corners of the state through its Halla-Bol Yatra. The march has now reached western Maharashtra, which is an NCP stronghold. On its ninth day in Pune, Mr Pawar intensified his attack on the ruling party. “The by-election results in Maharashtra like those from local bodies’ polls proved that the BJP’s downfall has started in the state also. Results in Gorakhpur and Phulpur in Uttar Pradesh are also indicative enough. This has made the BJP leadership disturbed and it is levelling allegations against opposition parties due to frustration,” Mr Pawar said.

He also claimed that during his tenure as the guardian minister of Pune, the district received ample development funds. “This government is doing injustice to the people here. You can ask any official. They say that the government is not sending any fund for public works. This government has made itself bankrupt,” Mr Pawar said.

The NCP is using everywhere video clips of BJP leaders making many promises in 2014. Referring to that, Mr Pawar said in his speech: “They promised about Rs15 lakh in each bank account. They promised smart city and ‘acche din’ (good days). They said inflation would be down. But what is the situation now? Petrol has crossed Rs80 for the first time in the history of India. Are these called ‘achche din’?”.

Friday will be last day of the march. The party has planned a mega rally on April 29 at Indapur in Pune where NCP chief Sharad Pawar will address a meeting.