Protesters get warm welcome in Mumbai

Protesters, who have been walking from March 6, did not expect the warm welcome from the people in the city. 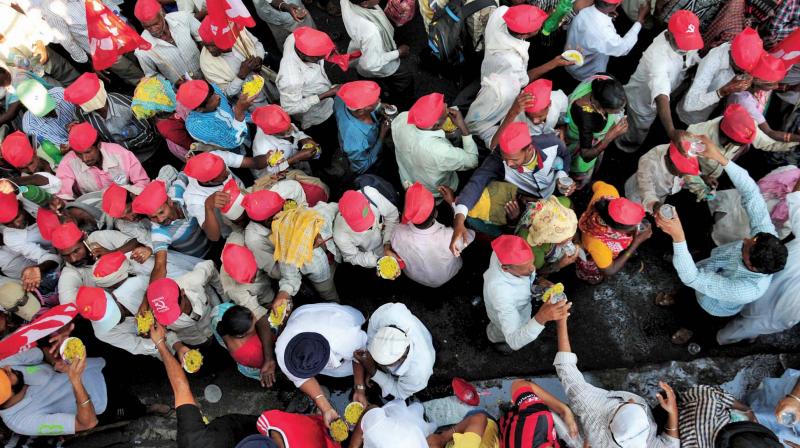 Members of the Sikh community served food and water to the farmers. (Photo: Debasish Dey)

Mumbai: The farmers’ protest march, which reached Mumbai on Sunday, received a  warm welcome in the city. Members from several communities declared their support for the march. Muslim women showered flowers on the agitators while the Sikh community associated with a Gurudwara served food and water to them. Anganwadi Sevikas from Ramabai Nagar also welcomed farmers in Ghatkopar.

Protesters, who have been walking from March 6, did not expect the warm welcome from the people in the city. They cheered when suddenly a few women showered flowers on them from one of the foot overbridges at Nahur. The warm wishes and support was received at various places till the protest reach Chunabhatti.

“We have been standing here since morning to welcome the farmers. We feel that they should get loan waiver and their demands also should be heard by the government. We are here to extend our support to them,” Noorjaha Sheikh from suburban Jogeshwari said. A few women with RPI’s blue flag showered flowers on the farmers.

The slogans such as, “Shetkari Tum Aage Badho, hum tumhare sath hai,” (farmers you march further, we are with you), “the farmers should get loan waiver”, “Kisan sabha zindabad”, “Jamin amchya hakkachi, nahi konachya bapachi”, (We are the owners of the land and not somebody else) were chanted during the march. Red flags, red caps were widely seen in the long march.

Members of Sant Baba Thaker Singhji Sevak Jatha at Tagore Nagar Vikroli were waiting for the farmers in scorching heat. They served water and poha to the farmers.