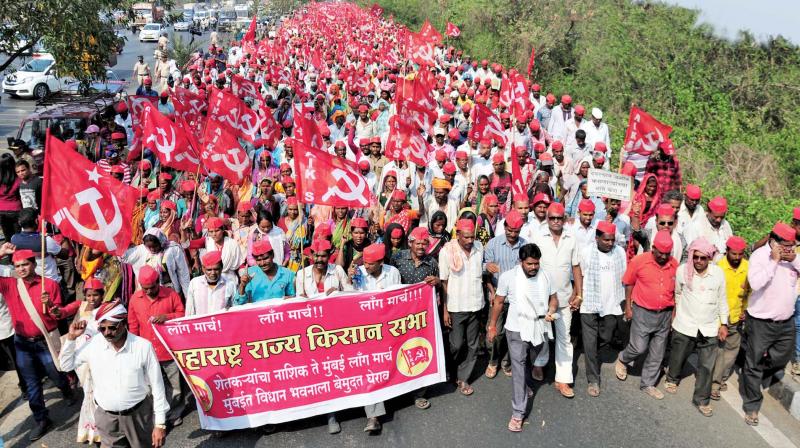 20,000 farmers participated in the march from Nashik to Mumbai — a distance of 167 km. (Photo: Debasish Dey)

Mumbai: Around 20,000 farmers of the Kisan Sabha will protest at Azad Maidan  on Monday. The tribal farmers started the long march from Nashik to Mumbai on March 6.

The farmers are protesting for their rights in light of the agrarian crisis. Some of their demands include the transfer of forestland titles, renewal of old ration cards and increasing the minimum support price of agricultural products to 1.5 times of production costs.

Except the ruling BJP, all other major political parties — Congress, NCP, Shiv Sena, RPI, Bharip Bahujan Mahasangh and MNS — have lent their support to the protest. The Maharashtra government had requested the farmers to withdraw their stir, but the farmers have refused to do so. The protest has embarrassed the BJP-led state government, which claimed to have taken various measures to tackle the farmers’ crisis.

In the backdrop of the agitation, chief minister Devendra Fadnavis held a meeting of all senior officials on Sunday evening. The CM appointed a committee of six ministers, Chandrakant Patil, Pandurang Fundkar, Girish Mahajan, Eknath Shinde, Vishnu Savara and Subhash Deshmukh, to resolve the farmers’ issues. The government had requested farmers to assemble at Azad Maidan on Sunday night to avoid traffic snarls on Monday morning as students have their board exams.

The tribal farmers reached Thane on Sunday morning and Somaiya ground at Chunabhatti in the evening. Water resources minister and BJP leader Girish Mahajan met the leaders of the Kisan Sabha and Communist Party of Marxist and requested  them to withdraw the march. However, the farmers refused. “We are ready to hold talks with farmers and discuss their problems. But they should withdraw the protest,” said Mr Mahajan.

However, Kisan Sabha leader Ajit Navale said that the protest will not be withdrawn. "We are ready to discuss with the government but will not withdraw the protest. We will march to gherao Vidhan Mandal tomorrow," Mr Navale said.

Nationalist Congress party (NCP) chief Sharad Pawar and Congress state president Ashok Chavan declared their support to the protest. Mr Pawar said that some prominent NCP leaders would participate in the march on Monday. Yuva Sena chief Aditya Thackeray too participated in the protest at Vikroli declaring his party's support to the cause. Bharip Bahujan Mahasangh and RPI workers participated in the protest and welcomed the agitators at various places in Mumbai on Sunday.

Speaking about the farmers' demands, Mr Navale said, "The tribal farmers need land titles to be transferred on their names. Their ration cards have not been renewed and hence they do not get grains under the PDS. They need 1.5 times price to the agriculture goods." He had led the farmers' strike last year which led to the blocking of milk and vegetable supplies to the cities for few days.

The agitating farmers included men and women. Bharati Vagere (45), who has been walking from Nashik said that the forest land belongs to them. "We have rights on the forest land but the government is not transferring it on our names. We are unable to grow grains on it and are forced to do meagre manual works to feed our family. The loan waiver scheme has not helped us as many of us do not have big land holdings," she said.

The farmers, who had camped at the KJ Somaiya Ground in Sion, will start to move towards the Azad maidat midnight, from where they will proceed to the state assembly tomorrow morning.