20,000 farmers to assemble at Azad Maidan

Police will not allow them to protest outside high-security zone around Mantralaya today. 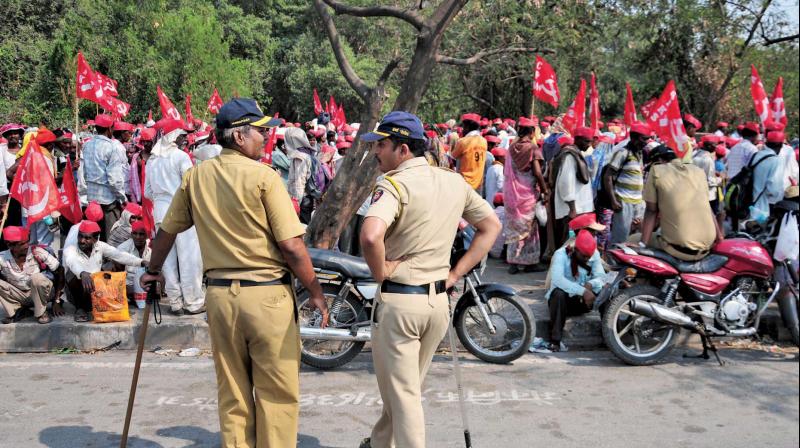 10,000 security personnel will be stationed along the route of the march. (Photo: Debasish Dey)

Mumbai: The protesting farmers, who arrived in the city on Sunday from Nashik are likely be held back at Azad Maidan on Monday. The police will not allow them to assemble outside the high security zone around state administrative headquarters, Mantralaya, where the around 20,000 farmers plan to protest on Monday. Farmers from across the state have marched to the city from Nashik to highlight their plight over agrarian issues.

The state has made elaborate security arrangements with traffic restrictions being put in place to handle the protest march of the farmers who are scheduled to storm south Mumbai today. The farmers reached Ghatkopar on Sunday afternoon and assembled at Somaiya ground around 9 pm. The police will have heavy presence at Azad Maidan enroute the Mantralaya and state legislative assembly. The local police along with the State Reserve Police (SRP), Riot Control Police (RCP) and reserve police will be deployed from central Mumbai to south Mumbai on Monday. However, the police officials did not disclose the exact number of security personnel that would be deployed on Monday to deal with the crowd and to avoid any untoward incidents. Sources from the police said around 10,000 security personnel would be deployed on the streets on Monday.

“There will be heavy police presence on the route of the farmers’ protest march. It will be a shifting bandobast (deployment) as per needed. The marching route is being formulated keeping in mind that the vehicular movement should not be hampered,” said Deepak Deoraj, Mumbai police spokesperson.

As per the plan, the agitating farmers will assemble at Somaiya ground, Sion around 9pm on Sunday. They will begin their march on Monday morning and walk via Ambedkar Road-Jijamata Udyan-JJ Flyover-Azad Maidan. The police however said that they might give them an alternate route from interiors of Parel in a bid to keep the vehicular traffic moving on the main roads. The marching farmers entered Mumbai via Mulund check naka on Sunday morning and marched via the Eastern Express Highway to reach Sion. The traffic police will continue to issue timely updates via Twitter, radio etc throughout the day.

It may be recalled that Dharma Patil (84), a farmer from Dhule had committed suicide outside Mantralaya by consuming pesticide in the month of January. Patil was protesting over the inadequate land compensations the state government had given him in return of his land.