The police has filed a case under sections 332 and 353 as per the Indian Penal Code. 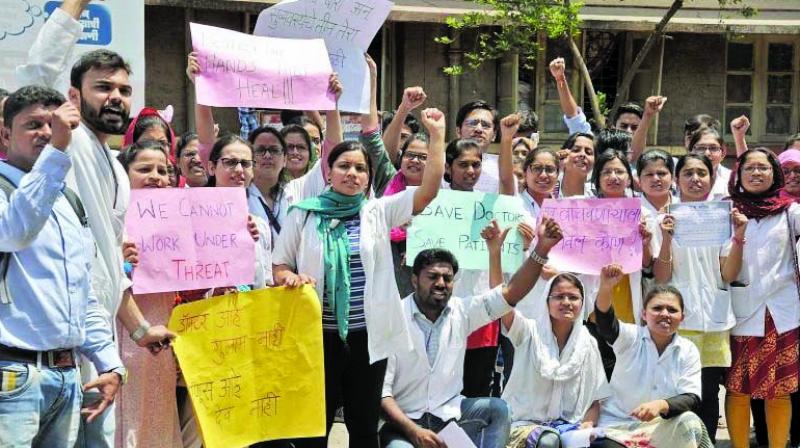 Mumbai: In another incident of medical practitioners being attacked by patients’ relatives, two resident doctors were allegedly assaulted at Nair Hospital on Saturday. The doctor was attacked after a 13-year-old patient from Bhiwandi died in the presence of his father during an ongoing treatment.

The officials said that the deceased, identified as Pawan Patil (13), was suffering from a chronic disease and was being treated at ward no 33 of Nair Hospital.

The doctors informed his family at around 5 am that he had succumbed to his disease, after which Patil’s parents and relatives held the medical staff responsible for his death and mounted an attack on them.

His parents blamed the resident doctors who were on duty for the boy's death and started abusing them, the official said. Pawan's father Datta Patil (45) allegedly assaulted doctor Kartik Asutkar and his colleague K Prajwal Chandrakant.

“The resident doctor on night duty was attacked stating his laxity led to the patient’s death. The parents have been booked in the case and further probe is underway,” said an officer of Agripada police station.

The police said that the CCTV camera footage of the hospital captured the attack by the boy’s father Datta Patil and his wife. Other medical officers on duty soon informed the police about the attack.

The police has filed a case under sections 332 (voluntarily causing hurt to deter public servant from his duty) and 353 (assault or criminal force to deter public servant from discharge of his duty) as per the Indian Penal Code (IPC) and under the provisions of the Maharashtra Medical Practitioners Act. Further probe is underway. No arrest has been made so far. The police is now recording the statement of the staffers and will take further action soon.

According to MARD President Dr Kalyani Dongre, the patient had been admitted to the hospital for the past one month.

His condition worsened on Saturday, following which the doctor wanted to put him on a ventilator. The relatives, the MARD alleged, refused permission to do so, and the patient died in the early hours of Saturday.

Following the attack on the two resident doctors,  the doctors staged a protest, demanding action against the attackers, and better security measures for the doctors. They also demanded adequate security for the wards, an increase in manpower, fixed visiting hours, and counsellors for relatives of patients.

The OPD services from the residents’ side of the hospital were also stopped following the attack.

This is not the first time that the hospital has come under the line of fire. In July last year, three resident doctors of the hospital were attacked by the relatives of a patient.

The incident had taken place after the patient, Rajkishore Dixit (50), who was critically ill, died during treatment.

"As the resident doctors declared the patient dead, 13 to 15 of his relatives stormed into the ward and attacked the doctors and the security guard as well," officials had said. The relatives had also damaged the hospital property.

In September 2019, group of six had launched an attack on doctors at the district hospital in Palghar and shot a video of the same.

The attackers had alleged that the doctor had been asking patients to go to a private hospital for treatment.

The group had come seeking answers from the hospital over patients not being treated, probe revealed. The group of men had hurled abuses and also manhandled hospital’s security and the ward boys before leaving from the spot.