The BJP says he had a change of heart, attributes it to ‘Modi’s charisma’. 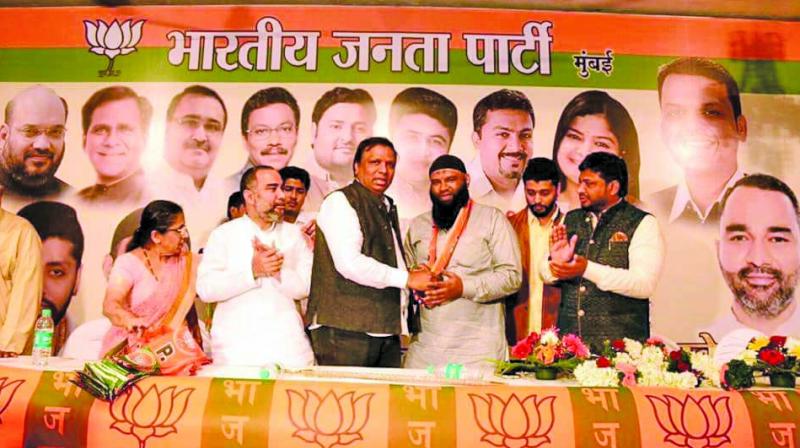 Mumbai: It has come to light that one of the Bharatiya Janata Party’s (BJP) latest supporters, who joined the party with the municipal polls just around the corner, had previously been spreading hate messages against Prime Minister Narendra Modi. The man in question, who identifies himself only as ‘Bhai Salim 90’, was seen photographed sharing the stage with BJP’s Mumbai president Ashish Shelar, garbed in a saffron scarf.

However, the same individual had been photographed holding an anti- Modi banner during the Prime Minister’s Mumbai visit in October 2015. The banner read, “Modi is the killer of innocent Muslims. Go back.” However, the BJP sees nothing odd with this development, and has hailed it as a victory on its part.

Niranjan Shetty, BJP spokesperson said, “I am aware that this person joined the BJP two days back. We did a background check and he does not have a criminal record. In fact he had a change of heart. That is Modiji’s charisma. It won Salim’s heart.”

The issue came to light after city-based lawyer Ijaz Naqvi saw a poster with Salim standing beside Mr Shelar. Speaking to The Asian Age, he said, “I am curious to know how this happened. Just over a year ago this person was seen holding anti-Modi posters, and now he has joined hands with the BJP, probably to contest BMC polls.”

However, Mr Shetty could not confirm if Salim will contest the BMC elections. When contacted, Salim 90 confirmed he had joined the BJP two days ago and claimed that in the last two and half years he realised that the party is working for good, and he was convinced that to change things “one has to become part of the system”.