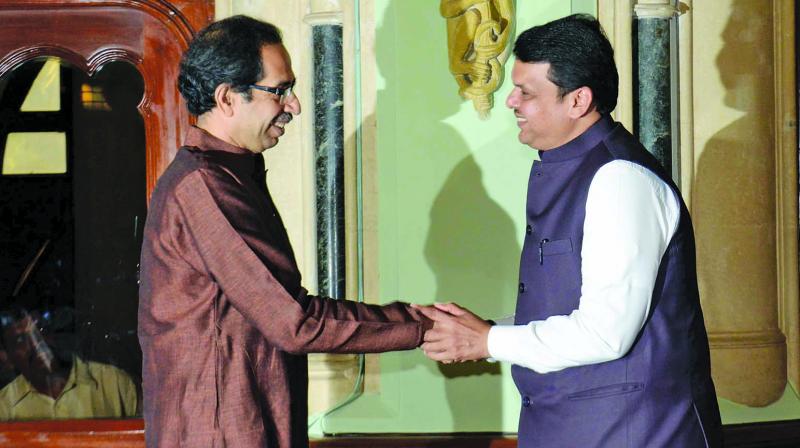 Mumbai: The moment the election commission declared that the BMC polls would be held on February 21, the saffron brigade, the Shiv Sena and Bharatiya Janata Party (BJP) started alliance talks with one another from Wednesday. Sources said that the BJP has been demanding 105 seats from the Sena considering their increased strength in Mumbai post the Lok Sabha and Assembly polls in 2014.

Chief minister Devendra Fadnavis held a meeting on Wednesday morning with his party leaders to start negotiations with the Shiv Sena. Sena president Uddhav Thackeray responded positively to the BJP and said that his party was ready to talk. Leaders from both the camps, however, refused to talk about the seat-sharing pact.

“We believe in having a transparent agenda for the alliance. We are going to start our talks from today with the Shiv Sena. We are positive about the alliance. BJP state president Raosaheb Danve will give information to Sena,” said Ashish Shelar, president, Mumbai BJP. Mr Shelar said that the seat-sharing pact would be discussed later. “We are more concerned about transparent functioning. At the right time, we will inform you about the decision,” he added.

Mr Thackeray too clarified that he is optimistic about the alliance with the BJP.  “We are expecting them to come with a proposal. I have not received anything regarding seat-sharing so far, but I have a formula for alliance. Ours is the oldest alliance that continued for 25 years. We will appoint three leaders and BJP will appoint three leaders for primary talks. After that I will discuss it with Mr Fadnavis,” Mr Thackeray said.

BJP sources said that the party has informally demanded 105 seats from the Sena. “There is no confirmation from the Sena as yet. We have more MLAs and MPs in Mumbai due to which we have demanded 105 seats,” said a BJP leader. In the 2012 polls, of the 227 seats in the BMC, the Shiv Sena contested 158 seats and won 75, while the BJP contested from 69 seats and won 32.

Poll position
A provision of Rs 100 crore has been made for the smooth conduct of elections, said civic officials. They added that there are about 90 lakh voters in the city. About 3 lakh new voters were added to the list in the voter registration drive that was conducted this year. “About 50,000 officials and employees from the BMC and various government agencies will be deployed for the BMC polls. Out of them, 46,000 will be deployed at voting booths, whereas 4,000 have been kept on reserve,” said an official.