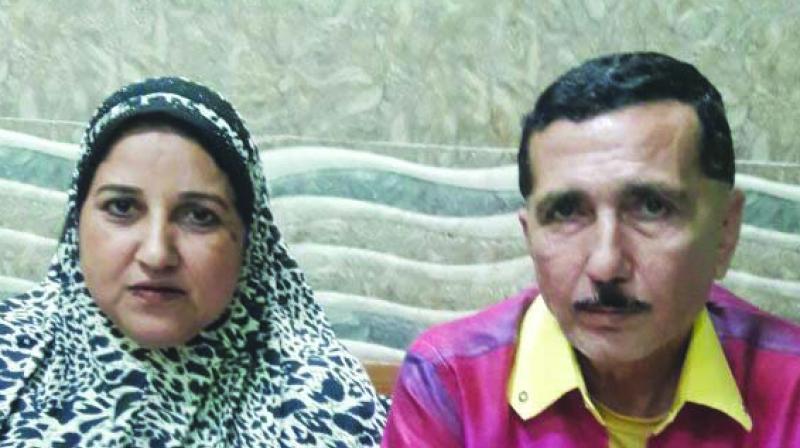 Jumma Khan with his wife.

Mumbai: Two days after the Anti-Terrorism Squad (ATS) registered a case against Tabrez Tambe for joining ISIS, a neighbour who helped Tabrez’s family get rented accommodation in Mumbra said Tabrez’s mother used to praise him a lot. Meanwhile, some friends of Saud, Tabrez’ brother, added that Saud used to stay at Amrut Nagar in Thane’s Mumbra with his mother on the same floor as his mother’s friend. But the family left that house because of certain problems that cropped up between them and that woman, born out of Tabrez’s behaviour, Saud’s friends added.

Tabrez was arrested late on Friday night in Libya, where he had joined ISIS with his friend Ali. The news of him joining the terror organisation has shocked all his neighbours and Saud’s friends.

Jumma Khan, a member of Saif Society, where Tambe’s family stays on sixth floor, said, “We helped Saud get a rented house in our apartment building. Saud had become friends with my son a year ago. They met each other through a common friend and became close due to their WhatsApp group. He came to our house one day, and when I met him next, my son asked me whether there is a room for rent in our building for Saud and his family. We asked the owner of the sixth-floor house about the same and, since then, the family has been living here.”

Jumma added: “Saud and his mother are very religious. We had asked them about their family’s background and they had said that they are from Dapoli in Ratnagiri. Tabrez’s father died some years ago, and the family shifted to Mumbai so that Saud could get better education. They told us that the brothers also have an elder sister who is married and a teacher. We thought that the family is very decent and helped them get the home. Saud and his mother are mature and sincere people. The mother was staying with Saud to take care of him. Tabrez used to send them money every month.”

Tabrez Khan and Ali Khan, two friends of Saud, said, “Saud and his family used to stay in a building in Amrut Nagar on the same floor as their mother’s friend. But they left that house and moved to Saif Society after issues cropped up between the mother’s friend and Tabrez.”