Expect some relief from rain on visarjan day: IMD

In the last 21 hours, rains to the tune of 54mm have been recorded, of which 49mm rain has been reported within a span of six hours alone. 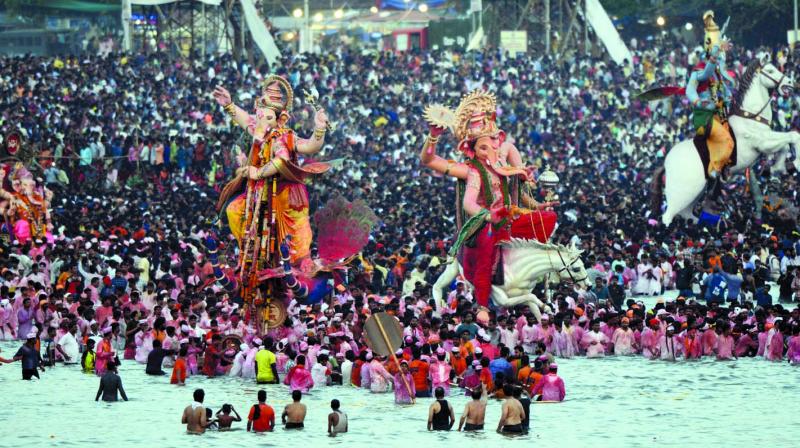 Devotees throng to the beach on last day of Chaturthi.

Mumbai: While there has been heavy rain on most days of the ongoing Ganesh festival, the city is expected to see some relief on the last day of the festival Thursday. According to the Indian Meteorological Department (IMD), light to moderate rains are expected on Wednesday and Thursday over the Konkan area, including Mumbai.

Meanwhile according to Skymet Weather, a private weather forecasting agency, rainfall over the Konkan region has reduced in intensity owing to the weakening of the trough. The weather agency stated that Mumbai rains of different intensities have been observed during the last two to three days. In the last 21 hours, rains to the tune of 54mm have been recorded, of which 49mm rain has been reported within a span of six hours alone.

“However, since Monday afternoon, rainfall activities started decreasing and only light showers of 5mm were observed during the evening and night hours. Only light showers with one or two localised intense spells are likely. Moreover, as the intensity would be on a much lower side, we do not expect any hindrance in the Ganpati Visarjan,” read the Skymet Weather report.

Meanwhile, heavy intensity rainfall and thundershower activity is expected around September 14 or 15, when moderate showers, with one or two intense spells may be witnessed by the city and adjoining areas.