It will be spent on maintenance, air-conditioning of exhibition and quarantine enclosures. 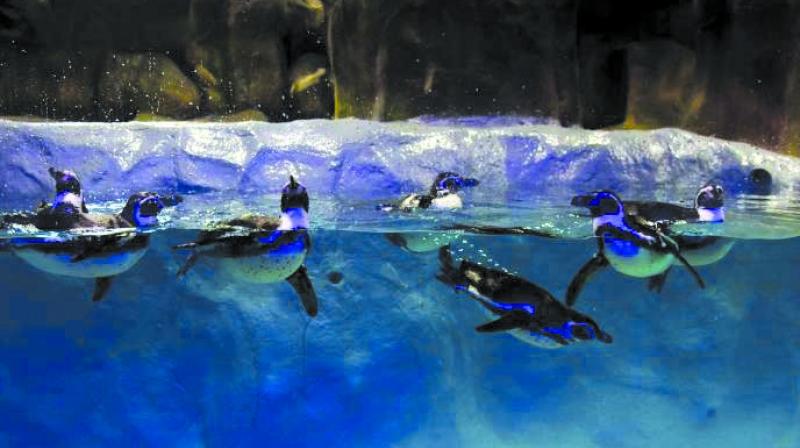 l The BMC will spend Rs 11.50 crore for next three years on penguins at Byculla zoo.

Mumbai:The Brihanmumbai Municipal Corporation (BMC) would spend close to Rs 4 crore per annum in next three years on penguins in Byculla zoo. A controversial firm, which was earlier fined by the civic body for false claims, has been allotted the contract for maintenance of penguins’ enclosure and supply of fishes for their food.

According to civic officials, the BMC will spend Rs 11.50 crore for next three years on penguins at Byculla zoo. The sum will be spent for maintenance and air-conditioning of exhibition and quarantine enclosures, the life support and electrical system, veterinary officers service and supply of fish food for penguins.

Penguins need 15 to 16 kgs of fishes every month as their food. According to zoo officials, ever since the exotic birds have arrived at the zoo nearly two years back, they have developed a special liking for the Bombay Duck fish, called Bombil in local language. All seven penguins eat around 5-6 kgs of fish every day. Of them, more than half the quantity consists of Bombay Duck. Penguins are also fed other fishes rich in oil like eel, sardine and Mandeli. The zoo authorities order 40-50 kgs of fish every week for penguins. The fish meat is kept in deep freeze (under 20 degree centigrade) at the zoo. After taken out, it is cleaned with water and the unclean parts discarded before being fed to the penguins.

“We do not have technical expertise for the maintenance of penguin enclosures. Hence it has been decided to allot the contract to Highway Constructions,” said a senior civic official.

The Highway Constructions was embroiled in a controversy over the penguin enclosure. A fine of Rs 1.4 crore was levied on Highway Constructions after the civic body found out that the firm had falsely claimed that it had a joint venture with a company having expertise in developing support systems for aquatic life. It had also recently bagged a contract for construction of 10 animal enclosures in the Byculla Zoo for a sum of Rs 59 crore.