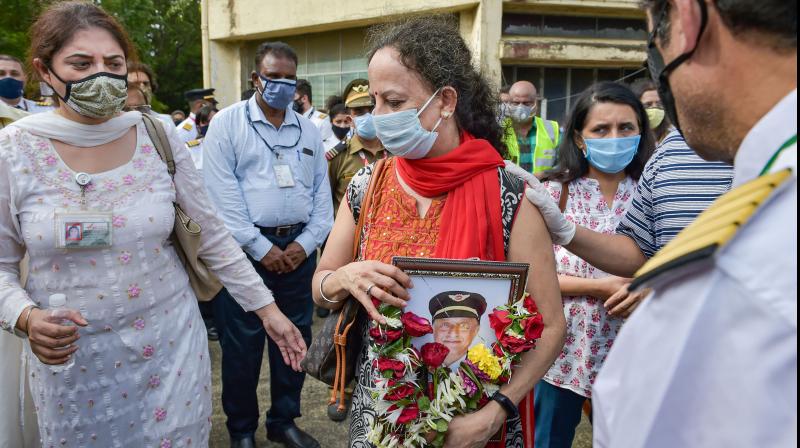 Sushma Sathe, wife of Captain Deepak Sathe, who died in a plane crash at the Kozhikode International Airport on August 7, 2020. (PTI)

Mumbai: The Maharashtra government has decided to accord a state funeral to Captain Deepak Sathe, the pilot-in-command of the Air India Express plane that crashed at the Kozhikode airport in Kerala last week.

The funeral is to be held later in the day.

The Air India Express flight from Dubai with 190 people, including a six-member crew, overshot the runway while landing at the Kozhikode airport in heavy rain on Friday, fell into a valley 35 feet below and broke into two, killing 18 people, including both pilots.

"The state has decided to accord a state funeral to the late Wing Commander (Retd) Captain D V Sathe. His life has been one that shall inspire many more young pilots to achieve the Sword of Honour and command over the skies," the CMO tweeted.

After the plane crash, Captain Sathe's wife Sushma and one of their sons had gone to Kerala to collect his mortal remains, which were brought here in a flight on Sunday.

The body was then kept at the Air India facility near Terminal 2 of the Chhatrapati Shivaji international airport here for some time before being taken to Bhabha Hospital.

Sathe was a former Wing Commander of the Indian Air Force (IAF) and had served at the force's flight testing establishment.

He survived an air crash in the early 1990s when he was in the Air Force and was hospitalised for six months, his cousin earlier said.

Sathe had suffered multiple injuries on his skull in that incident, but due to his strong will power and passion he cleared the test and started flying again, he said.

The body of co-pilot Akhilesh Kumar was cremated on Sunday in the presence of his family members and officials of Air India and Air India Express at his hometown Mathura.

The airline on Sunday said the mortal remains of 16 passengers killed in the plane crash have been handed over to their families, and added that authorities were investigating the accident.