The tablets have been part of the civic body’s health improvement scheme for school children for the past many years. 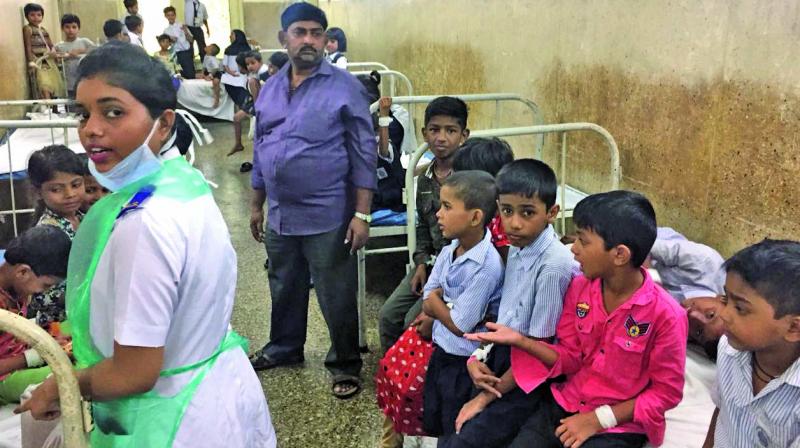 Students admitted and being treated at the hospital.

Mumbai: After a 12-year-old girl died and 350 students of a Govandi-based civic school had to be admitted to civic-run Rajawadi and Shatabdi hospitals, parents claimed that their children fell ill due to consumption of deworming and folic acid/iron tablets given by the school authorities.

While their children were given iron tablets as supplements on Thursday and Friday, deworming tablets were given on Monday, the parents said. The tablets have been part of the civic body’s health improvement scheme for school children for the past many years.

Civic officials claimed that following the girl’s death, panic spread in the Bainganwadi-Govandi, Shivaji Nagar slum area and several parents rushed their children to hospital as a precautionary measure. Shakila Bano Khan, the mother of a sick child, said, “I am tensed with this news. I saw my kid was not feeling well and heard about the girl who died due to medicines. We then rushed our kid to hospital.”

A Class five student Javedali Ansari said, “After consuming the tablets, I experienced pain in the stomach. I told the teacher after which I came here along with the other kids.”

Another student Shaheed Muhammad Patel said, “Now I will stay here and not go to school for two days. I will play and enjoy. I was here ever since my mother brought me. I am having cold and cough.”

Meanwhile, Mahesh Palkar, education officer of the BMC cleared allegations saying, “The student who died did not come to school since the last two days so there is no way she would have consumed the medicine provided by the school. The girl was in a healthy state. It is mob psychology. None of them is serious and more than half the kids have been discharged.”

The BMC held a deworming exercise on August 6 and used medicines provided by the state government under the central government scheme. Albenazone tablets were used for deworming. Albenazone essentially kills tapeworm, roundworm and hookworm which may be present in a person’s digestive system. Following this, iron and folic acid tablets were given to the children. “Depending on the kids’ health, folic acid or iron tablets may be given for  15 to 30 days. For anaemic kids, it is given for a prolonged period to improve their health. Worms can cause a drop in haemoglobin,” said Dr Santosh Revankar, BMC deputy executive health officer.