The children had complained of nausea, giddiness and stomach ache. 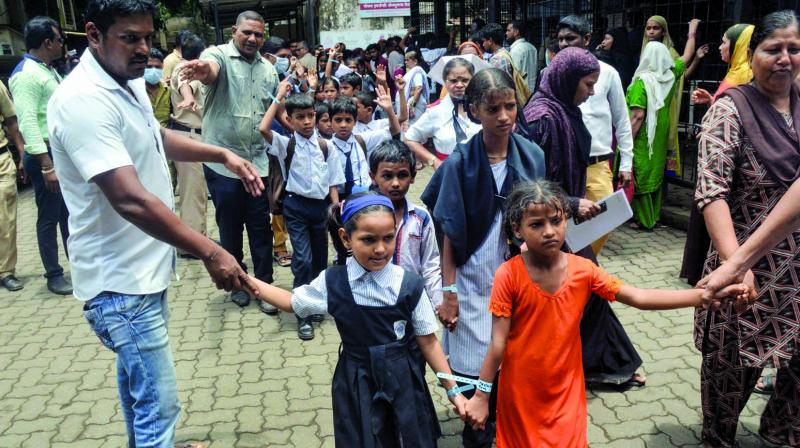 Mumbai: A 12-year-old girl died and over 471 children had to be admitted to the civic-run Rajawadi Hospital and Shatabdi Hospital on Friday after consuming de-worming tablets and folic/iron tablets that were distributed in their BMC-run school in Govandi. The children had complained of nausea, giddiness and stomach ache.

According to civic officials, the victim who died, Chandni Sahil Shaikh, and the other affected kids study at BMC's Urdu School Number 1.

Ms Shaikh's mother alleged that the tablet was the cause for her daughter's death, denying the allegations of civic officials, who said that her daughter was afflicted with tuberculosis (TB).

The police had registered an accidental death report (ADR) at Shivaji Nagar police station. Ms Shaikh’s post-mortem has been done at JJ Hospital by a panel of doctors. The cause of death is ‘Evidence of Broncho-pulmonary haemorrhage’. However, final opinion is pending for chemical analysis and histo-pathological examination reports.

Out of the 471 students treated, 389 have been discharged and 82 students are still undergoing treatment. Schoolchildren across the country are given iron folic acid and de-worming tablets as per a Central health scheme.

BMC’s executive health officer Dr Padmaja Keskar said, “On Monday, as part of a national programme we distributed medicines for de-worming and iron/folic acid medicines to all BMC-run schools.”

Talking about Ms Shaikh’s case, Dr Keskar said, “Ms Shaikh went home on Monday and did not return to school the next day. She attended school on Wednesday and on Thursday, died at home after vomiting blood. The details of her previous illness were not known. We suspect that she had TB.”

She attended school on Wednesday and on Thursday, died at home after vomiting blood.  The details of her previous illness were not known. We suspect that she had TB.”

Ms Shiakh's mother has accused the BMC school's administration for her daughter's death. Mrs Shahnaz Shahid Shaikh said, “My daughter did not died due to TB. After consuming the tablet on Monday she had acute pain in the chest and body. She even vomited blood.”

Director of civic-run hospital, Dr Avinash Supe issued a circular stating, the de-worming and iron tablets with expiry 2019 and 2020 respectively, have been discontinued with an immediate effect.

The police have registered an ADR and started investigation. They have collected samples of the medicines. DCP Umap said, “We have collected samples of the tablets and also the food supplied to students during the interval. The tablets are of folic acid and iron and Albendazole IP 400 mg tablets. We have registered a case of ADR at Shivaji Nagar police station. The autopsy of the deceased was done at Rajawadi Hospital by a panel of doctors and reports have been sent to the forensic lab at Kalina.”