The school authority is allegedly refusing to take responsibility of placing the barricades. 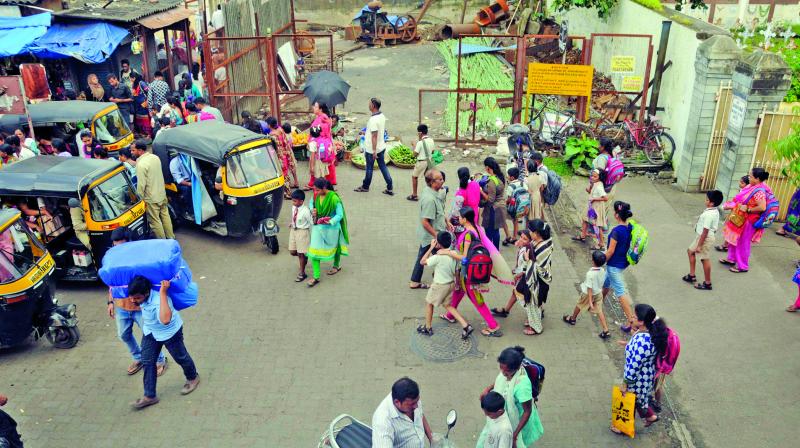 The parents said they had requested the management to put barricades outside the gate to protect the children from the unregulated vehicular movement.

Mumbai: Several parents of kids studying at St. Joseph High School, Vikhroli have complained to its management that the students run a safety risk due to the vehicular traffic outside the exit gate. The parents said they had requested the management to put barricades outside the gate to protect the children from the unregulated vehicular movement.

The school, using funds given by a church adjoining it, had last December spent around Rs 32,000 in order to make ‘barricades’ and place them in front of the school gate which would reduce the possibility of accidents. The school authority is allegedly refusing to take responsibility of placing the barricades.

“We have the barricade ready on the school ground, which was proposed by the earlier principal after there was an accident outside the school gate. All the school has to do is ask the security guards to place the barricade by paying them extra Rs 500. If they can’t do this much thing for their students, how is even fair,” asked Robert D’Souza, a parent.

The parents conducted a signature campaign in favour of the barricade, but the school authorities have allegedly ignored the their demands.

Throwing light on the traffic situation in the evening, an auto rickshaw driver said, “Classes get over at peak hour — a time when corporate houses drop their employees in their vehicles, which creates congestion. Moreover students, while exiting from the school don’t move in a queue, but disperse everywhere in full spate.”

“During such times, if someone gets hurt, all the fingers are pointed at the auto rickshaw drivers, who are accused of driving rashly. Placing barricades will only protect the students from harm’s way,” he further said.

When the principal of the school, Father Sachin Lopez, was contacted, he refused to comment, saying, “I don’t want to talk about this matter anymore as we won’t take charge for anything happening outside the school gate.”