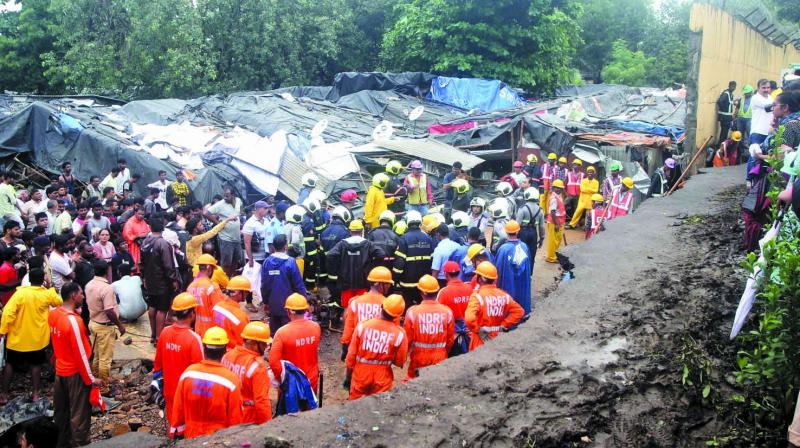 Mumbai: People from Malad Ambedkar Nagar, where 29 people died after wall collapse last week, are seeking permanent rehabilitation. The residents are now blaming the Brihanmumbai Municipal Corporation  (BMC) for the situation saying that the civic body has failed to help them.

Few NGOs and organisations are helping the victims with food and basic needs. According to an activist of Pani Foundation, Sitaram Shelar, 103 families have received a basic help of Rs 5,000.

One of the residents Niranjan Rana expressed his anger about the approach of BMC authorities and politicians. He said, “Since the wall collapse incident, the response from the disaster management team of BMC is too slow. Due to this we have lost many people. No politician or authority offered helping hand to us. An NGO and social worker organisations are regularly visiting us to provide food”.

While digging through the debris in search of belongings, few residents discovered two dead bodies on Tuesday. Another resident Prashant Darekar said, “The wall collapsed site is still covered with debris. While searching for their belongings, the residents found two dead bodies under the debris”. He further added, “People do not have temporary shelters. Hospitals are asking families of the patients to take them home.”

An NGO on Wednesday published a fact-finding report on the incident.  Residents of Ambedkar Nagar visited Marathi Patrakar Sangh during the report-publishing event. However, police stopped them from entering and sent them back.

The fact-finding report mentioned that the collapsed wall was not built properly. “There were no outlets in the wall to give way to water. Due to which the pressure on the wall increased and the cement wall collapsed,” said Brinelle D’souza, me-mber of a fact-finding committee. “Why BMC failed to give flood alerts? Why they have not declar-ed the flood prone areas?” Ms D’souza questioned.

Another member of a fact-finding committee, Vaishali Janarthanan demanded civic body’s plan for such areas and inquiry on the disaster management department of the BMC.