Mr Shivakumar landed on Wednesday morning by a 7.15 am flight and went straight to the 5-star hotel where dissident MLAs were put up. 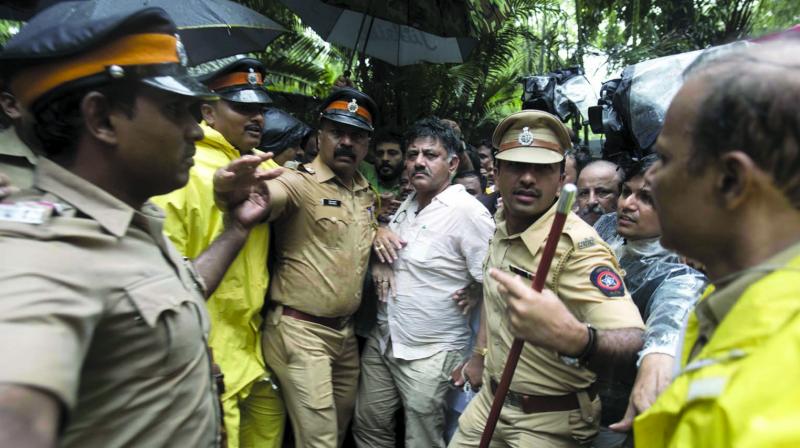 Mumbai: The Karnataka political crisis drama continued to unfold in Mumbai as senior Congress leader D.K. Shivakumar tried to enter the Renaissance Hotel in Powai on Wednesday, where the rebel Congress-JD(S) legislators were put up. However, he was denied entry after the MLAs claimed that he was a threat to them.

Mr Shivakumar landed on Wednesday morning by a 7.15 am flight and went straight to the 5-star hotel where dissident MLAs were put up. Mumbai leaders such as Milind Deora and former Maharashtra minister Naseem Khan also joined him.

In their letter, the rebel MLAs wrote, “We heard Mr Shivakumar was going to storm the hotel and we feel threatened. Do not allow him to enter the hotel premises.”

On his part, Mr Shivakumar claimed the police was not allowing him to enter the hotel despite having booked a room in the hotel. He then sat at the hotel gates itself in protest.

Mr Shivakumar, who is known as the Congress’ troubleshooter, camped outside the Renaissance Hotel since the morning, determined to meet the rebel MLAs. “I did not come here to trouble anyone. But to meet my friends who are here in the hotel. We lived years together. I booked a room in the hotel and no one can stop me from going inside,” he said.

However, slogans of “Mr Shivakumar go back” were raised by some people, further escalating the tension in the atmosphere. As a TV channel was interviewing Mr Shivakumar, he was almost pulled away by the Mumbai police and detained along with Mr Deora and Mr Khan. All three were taken to the BKC police guest house. But they were finally released at 6 pm.