As per the activists’ calculations, the three hectare Aarey land measures close to 221,000 square feet. 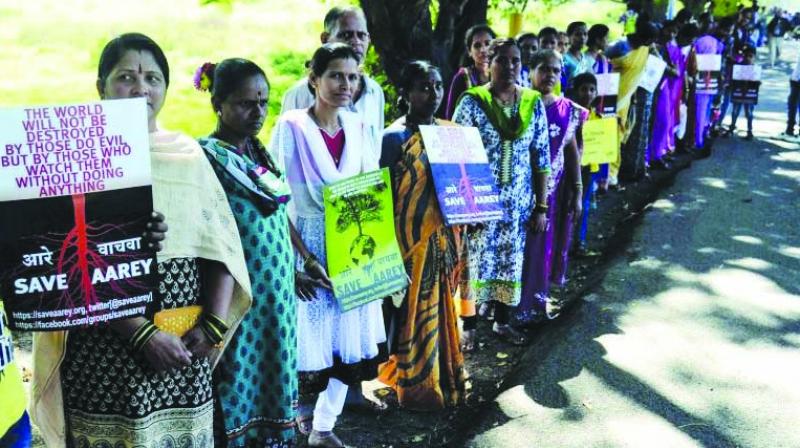 Mumbai: Environmental activists have alleged that the only purpose of the Metro coming up in Aarey is the real estate profit to be made by Mumbai Metro Rail Corporation (MMRC) which would have not been possible at alternative sites suggested by them as they all come under CRZ rules. Going by a calculation of three hectare casting land acquired by MMRC, it will make a minimum profit of Rs 353 crore. NGO Van Shakti on June 7 also wrote to chief minister Devendra Fadnavis, asking for Aarey to be included in SGNP.

As per the activists’ calculations, the three hectare Aarey land measures close to 221,000 square feet. The current real estate value of the area is `16,000 per square feet and hence, calculating on the basis of FSI 1, the activists alleged that the real estate value of the land goes up to 35,360,000. Moreover, the activists in their letter to the forest department alleged that the forest department was deliberately concealing information and making statements contrary to facts borne out by documents. The letter alleged that the department had always shied away and refrained from admitting the truth about Aarey being a part of SGNP. The letter claimed that the same forest department was aggressively claiming hundreds of acres of land infested by slums as being part of SGNP while continuing to wash its hands off Aarey which was “infested with” five lakh trees, 76 types of birds, seven leopards, endemic scorpions, reptiles belonging to schedule I of the Wildlife Protection Act, among others.

The activists asked for speedy intervention in the interests of conservation, health of citizens, and protection of wildlife. The activists listed all the evidence they had towards saving Aarey from construction work for the Metro.