The police are investigate if the driver had fallen asleep while driving. 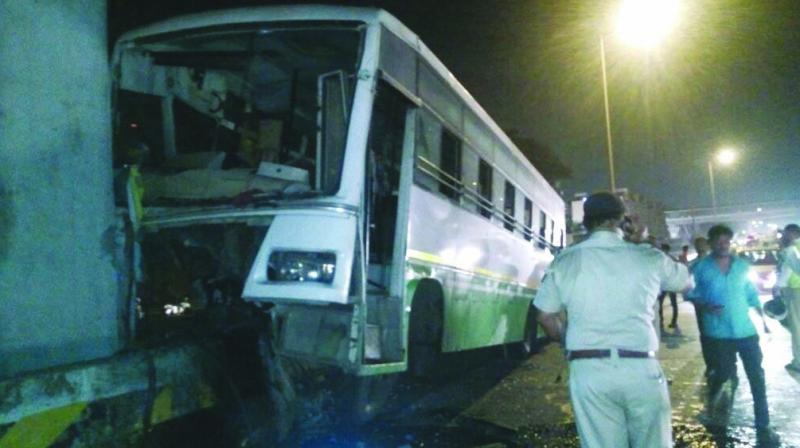 MUMBAI: Eleven persons, including 10 students of the Tata Institute of Fundamental Research (TIFR) and a bus driver, were injured after the bus they were travelling in collided with a wall on the eastern freeway in Mumbai Wednesday night. The injured have been admitted to civic-run Shatabdi Hospital and Jain Hospital.

At about 10.30pm on Wednesday, a bus (MH-43-H-2824) carrying around 30 students of the TIFR from Colaba to their hostel in Mankhurd’s Mandala area met with an accident near Aanik Panjalpol tunnel ahead of Imax Wadala towards Trombay on the eastern freeway. The bus collided with a wall ahead of the tunnel, injuring the driver and 10 students of the TIFR.

A police official said, “We are probing the accident, and most likely, the driver lost control and misjudged. We will investigate if the driver had fallen asleep while driving.”

A few minutes into the accident, a team of policemen and fire brigade officials reached the spot and rushed the injured to the nearest civic-run hospitals. The ones with minor injuries were sent to Shatabdi Hospital, while those who sustained major injuries were rushed to Jain Hospital.

The fire brigade officials towed away the bus and cleaned up the oil spill that took place due to the sudden collision.

The police said that the cause of the accident seemed to be a simple misjudgment while entering the tunnel. No casualty was reported.