Passengers evacuated as Monorail gets stuck

The interruption in services affected footfall on Wednesday and has reduced by 40 per cent. 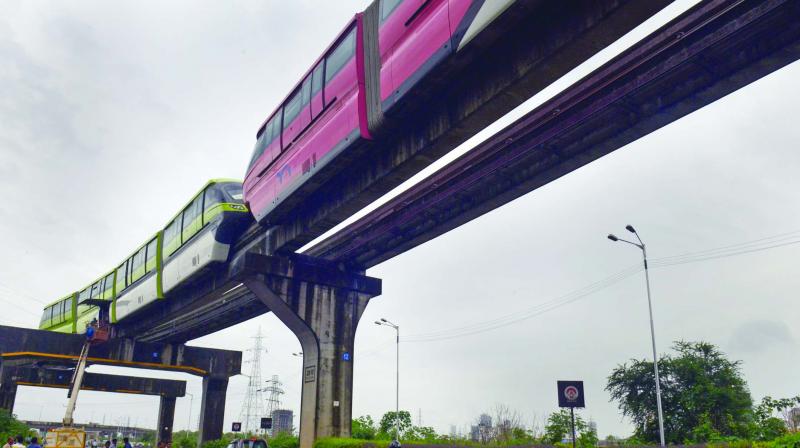 The services were affected for nearly an hour each in the morning and afternoon as two trains got stuck mid-way towards Wadala depot. (Photo: File image)

The trains developed a technical snag twice and were pushed to Wadala depot with the help of another train.

Due to interruption in services the number of commuters are decreasing. On Wednesday, 40 per cent less commuters used the services.

Passengers were transferred to another monorail after it was taken to Wadala Bridge Monorail station.

“On Wednesday morning, monorail (RST-04) was rendered nonfunctional due to power failure and was pushed to the Wadala depot with the help of another train (RST-06). This caused stopping the Monorail services from 10.01 am to 10.45 am causing stoppage of 44 minutes. The Monorail services resumed to normalcy at 10.45 am. The under-repair RST-04 too resumed functioning at 10.55 am,” said Dilip Kawathkar, Joint Project Director and spokesperson for Mumbai Metropolitan Region Development Authority (MMRDA).

By afternoon monorail  services were working with 20 minutes’ gap.

Salina Prajapati who was traveling from Wadala said, “At the counter they said trains are running late by 30 minutes. But, I got to board the train within 10 minutes. The person at the ticket counter at every station was informing the commuters regarding the delay in the monorail services and was selling tickets only after the commuters agreed to it.

Ujjwal Sen, a commuter  at Lower Parel said, “I traveled by monorail for work. Today when I heard that monorail services have stopped. I returned home and then left again  after an hour as I have a pass for the monorail and can not afford a taxi.”

In the afternoon at around 4 pm the same incident happened at Wadala station.

The interruption in services affected footfall on Wednesday and has reduced by 40 per cent.

The much delayed second phase of the monorail was flagged off in March.