The cost of the robot is about one crore. 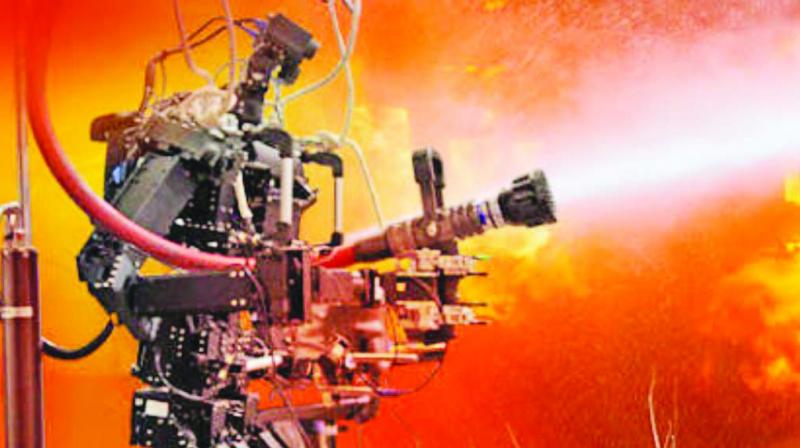 The robot can control fire even on the 30th floor

Mumbai: A summer robot, which carries out fire-fighting operations on its own, is all set to join and beef up the resources of the Mumbai Fire Brigade (MFB). The civic body has issued tenders for the supply, commissioning and testing of fire-fighting robots along with carrying vehicle. With the help of the robot, the firemen need not battle blazes by entering the flames and they can control the blaze by using the remote control. The cost of the robot is about one crore.

According to the fire officials, the robot can control the fire even on the 30th floor, as it can jet water up to the height of 55 metres. The machine also has a camera, which can provide live pictures of fire situation from inside. The fire-fighting robot is made up of aluminium sheets – which are used in aeroplanes – that can withstand temperatures of up to 700 centigrade. For the MFB, the procurement of summer robot assumes greater significance in the wake of death of top fire officials in the Kalbadevi fire. Four fire officials, including the then chief fire officer Sunil Nesrikar, had lost their lives while carrying out fire fighting in a major fire at Gokul Nivas building at Kalbadevi on May 9, 2015.

“The robot can be used in desperate situations where there is a threat to fire fighters or in incidents like radiation, emission of poisonous gas etc,” said a fire official. “We welcome the decision of MFB to purchase fire fighting robotic vehicle. But only one robot is insufficient to meet future fire challenges of the city,” said Godfrey Pimenta from the Watchdog Foundation.