The Amar Mahal junction flyover on the Eastern Express Highway has developed problems and needs repair. 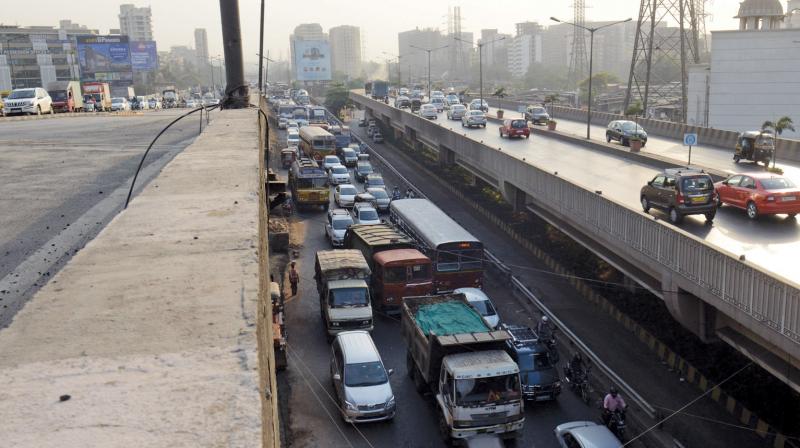 Mumbai: Motorists should get ready for a week’s disruption as the Amar Mahal junction flyover on the Eastern Express Highway, which is in Chembur section has developed problems and needs repair. The flyover was red-flagged by the Traffic Police after they observed that the joints in the same section appeared distorted and moved from its original place, as a result of which it was shut down for traffic.

The Public Works Department (PWD) was notified, which then called in IIT-Bombay professor Ravi Sinha for consultation. Mr Sinha, who is a structural engineer by qualification, said, “This bridge is very unique because it was constructed using steel and a technique called Quadracon, so identifying the underlying problem is the key to being able to do the needed repairs.” Mr Sinha said he immediately told the PWD engineers to shut down the bridge upon inspection.

The Chembur section of the bridge is important as it connects the Eastern suburbs to Thane and Traffic police has also stationed 20 officers at the spot at any given time.

Assistant commissioner of police (traffic) Sudhir Ranshevre said, “We have made arrangements of man power for a week, as are estimate is that that will be the time required for the issue to be sorted.”

Anand Angre, a passenger who did not know about the actual effect of the block, said, “I am a resident of Chembur and caught a cab to my office towards Thane and was diverted, due to which it took me two hours to get to Thane even though I was travelling at around 11 am.”

Many other commuters took to social media to vent their frustration and advised other passengers to avoid the route.

A PWD engineer said, “For now we have not only closed the bridge but also the section of the road below and are, in parallel, laying asphalt for a temporary road to divert traffic from Chembur to Ghatkopar and further down to Thane.”